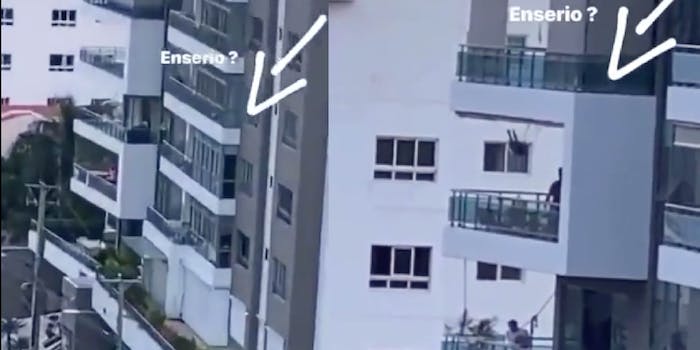 'Just because you cannot go to the park does not mean you can risk your child's life...'

A video of a child swinging on a high-rise balcony is trending on Reddit, and viewers are weighing in on whether they think it’s safe.

The video shows an adult pushing a child on a swing on a seventh-floor balcony. The video is captioned, “just because you cannot go to the park does not mean you can risk your child’s life.”

Many users said just watching the video was “terrifying.”

“Just watching this gives me that dropping feeling in my stomach like when going down a hill on a roller coaster,” one user commented.

Some said the swing could have easily been set up inside to avoid the risk of falling over the edge of the railing.

“They have swings that go on door jams and that you can mount in the door frame. This is an unnecessary risk,” one user said.

“All you need is an over the door pull up bar, and this swing could be inside apartment,” another added.

While many are in some sort of lockdown and social distancing, parents are looking for creative ways to keep their children entertained.

Viewers said the video was filmed in Spain, but aren’t sure exactly where. Spain was one of the European countries hardest-hit by the coronavirus and implemented a strict lockdown March 14. Citizens were not allowed outside their homes for any non-essential trips until May, according to NPR.