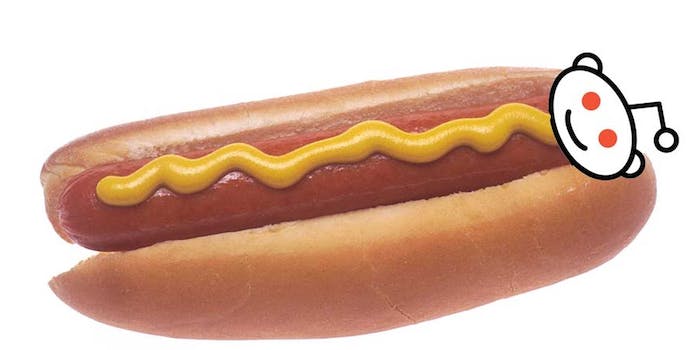 Men and women alike, hidden behind an array of throwaway accounts, are hooking up through two new subreddits.

Warning: The following story contains sexually explicit material that is not suitable for work.

While Craigslist and other adult personals sites may still rule the world of anonymous, no-strings-attached sexual encounters, two communities are trying to bring that connection to Reddit. Men and women alike, hidden behind an array of throwaway accounts, can benefit from r/RandomActsOfBlowjob and r/RandomActsOfOralSex. 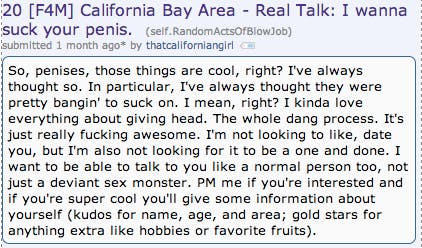 The concept behind the subreddits is simple. Redditors post their location, age, and sexual preference. Then they wait for a fellow subscriber to accept their offer.

The most recent entries: 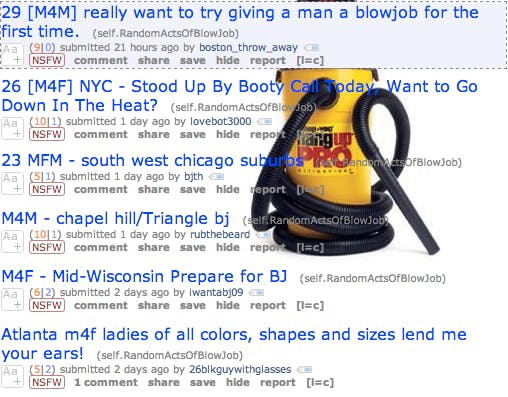 This was pulled from the top-voted posts. The offers from women are a lot more popular: 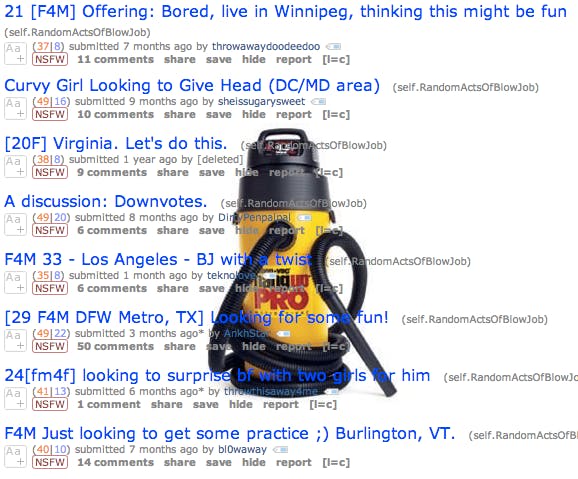 R/RandomActsOfBlowjob, which boasts more than 4,000 members, is set up to cater more to Reddit’s male population, regardless of orientation. Its sister subreddit, r/RandomActsOfOralSex, is smaller and more generalized. While the latter community is “for the ladies,” it too sports a staggering number of males offering their services.

Here are some of the top posts: 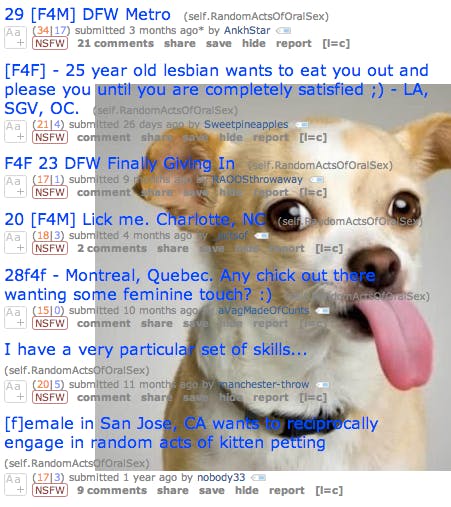 Naturally, discretion is high-priority in an online oral-sex trade. Photos are exchanged only in private (except for one top-rated Random Acts thread featuring an image of the original poster’s breasts); few, if any, personal details are exchanged, and exactly zero users I messaged wrote me back to answer questions.

The most important question: Does offering downtown services on Reddit actually work?

Occasionally, the original poster comes back with a romance novel’s worth of kiss-and-tell.

I ended up receiving about 40 pm’s after I posted on here. I chose someone that was very local, and today I went to his house to meet up. I was nervous yet excited. When we began talking I relaxed a bit, we headed up to his room and I sat on the bed. He said we had about an hour before anyone got home. Then he leaned in, we started making out. He was a great kisser! Lip sucking, tongue sucking, all that good stuff. He reached into my shorts, started playing with my…

Another, “Update to OKC hookup (F)f(M),” features photo evidence crossposted in the NSFW r/Amateur (and elsewhere).

Here’s the followup to “My [f]irst RAOB in Melbourne“:

After a few PMs it was settled: Friday night. Formalities over. Details arranged.

So the big night came and I had to have a few drinks to steady my nerves. I put on my skimpiest bra, along with a little black zip top.

My heart was beating wildly as I opened the car door and slid inside. The grin on his face relaxed me straight away, and with barely a word I was unzipping my top and displaying my generous G cups to a perfect stranger! He had never seen anything quite like mine in real life, so started by just cupping and gently stroking them. Then he…

But out of every inquiry on either forum, only one competely blew me away. You might say I was Taken with it.

From a r/RandomActsOfOralSex post titled “I have a very particular set of skills…“:

Skills I have acquired over a very long career. Skills that make me a perfect fit for a needy p***y somewhere in Manchester, UK.

I will find you, and you will squeal.