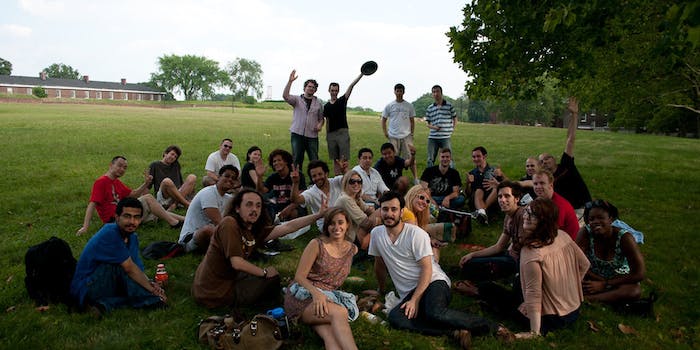 Redditors from over 160 locations around the world congregated on Saturday for Global Reddit Meetup Day, the once-a-year event that encourages the often-reclusive users of the social news site to get together socially.

Redditors from over 160 locations around the world congregated on Saturday for Global Reddit Meetup Day, the once-a-year event that encourages the often-reclusive users of the social news site to get together socially.

In New York, redditors took over a small part of Governors Island, swarmed about Central Park in small groups, and invaded several local bars. In Seattle, they took over the beach in Golden Gardens Park. And in Chicago, about 175 redditors took over an entire house for a party and music concert.

The gatherings were also international, spreading as far away as Mexico, Kuwait, Ireland, and Turkey.

No official numbers are available yet for the second annual event (those come out Tuesday). But it didn’t take long for pictures and stories from the meetups to dominate Reddit’s front page.

And it also took no time for redditors to do what they always do: incorporate the pictures into many of the site’s memes.

The photo from the Ireland gathering, for instance, got mashed up a couple times into the “Am I doing this right?” meme (the best was this one).

In Philadelphia, redditor mrhomer posted a picture with the title ”6 Black redditors at the /r/philadelphia meetup. Beat that other cities!” (it’s common for users to make fun of the site for what they believe is its fairly homogeneous ethnic makeup).

And a number of others played off of the forever alone guy meme, with at least two one-person meetups in Edmonton, Canada and Istanbul, Turkey (our favorite comment from the Turkey pic: “Try Constantinople?”).

The Daily Dot was personally on scene in Chicago and New York City.

In Chicago, redditors analogkid01 and astrixtc teamed up to throw a 10 band, two venue house party attended by roughly 175 local people. The concert featured local acts such as Audiences, DeadBeat and Pink Monkeys as well as April Hill, the redditor behind the popular Reaction_On_My_Nub novelty account. The organizers even went so far as to purchase a generator because, they said, they didn’t trust the house to handle all the juice used by the bands and the party. By many accounts, the Chicago meetup was deemed the most epic in all the world. Photos from later that night can be viewed here.

Interviews and video from Daily Dot

Our Fruzsina Eördögh captured Chicago redditors in their own words

Darren Soloman says it was “any New York crowd”

More from various Reddit posts you may have missed

Over 250 redditors met in San Diego

At least two redditors joined the “Not So Forever Alone Club”

One meetup in India spent most of the time on smartphones, browsing Reddit

Phoenix put together a great gallery of their redditors

Barbados may have had light attendence, but they win for location