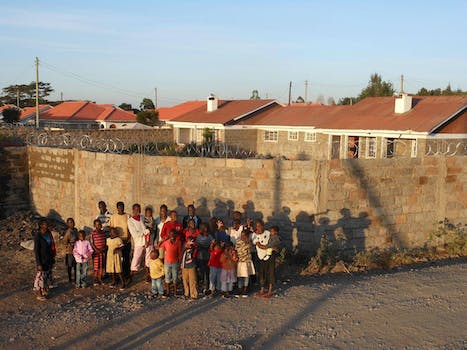 What started as a charity drive has turned into an ongoing partnership between the Reddit community and the Faraja Children's Orphanage.

The next time machete-wielding thieves try to invade the Faraja Children’s Orphanage, they’ll be greeted by a cement wall topped with razor-sharp barbed wire.

That’s a powerful symbol of the orphanage’s newfound safety—but also of social news site Reddit’s growing power as a platform for crowd-sourced charity.

It all began with a gruesome photograph and a plea for help.

In January Ben Hardwick, 21, posted a picture of Anothy Omari to Reddit. Omari’s face was puckered with a six-inch machete gash, which wound down his forehead, past his eye, and ended at the bridge of his nose.

Omari had single-handily defended the orphanage of 35 children from thieves. The machete wound was his reward.

Hardwick, a Penn State student working as an intern in Kenya, pleaded with the site’s users to help: “Think we could raise the $2,000 needed for the remainder of the cement/barbed wire wall to keep both him and the children safe?”

Redditors responded with a whole lot more. Nearly $80,000, in fact. Weebly, the donation platform used by the charity, added an additional $10,000.

Yesterday, Hardwick returned to Reddit with another picture—this time far less gruesome. It showed the imposing wall the charity built thanks to Reddit’s donations.

Hardwick was interested in more than just sharing updates, however. He wants to build a long-term relationship with Reddit’s millions of charitable strangers.

“We believe you have earned a right to have a voice in our organization,” Hardwick wrote on Reddit Thursday. “But we’re just not sure how that should look and we knew that if we turned it over to you, then perhaps some wonderful ideas may emerge.”

Hardwick is inadvertently launching an important experiment in Reddit’s unique brand of Internet activism. The site has been criticised for its flash in the pan passions, be they political, charitable, or viral. There are, indeed, few examples where someone has turned a Reddit donation drive into a sustainable, long-term project. (There are, however, many broadly focused charitable sections on the site.)

Hardwick clearly thinks he can change that. For him, Reddit’s $80,000 represents a direct investment in the orphanage’s future. And after he asked for ideas, Reddit’s hive mind didn’t disappoint.

In the top-voted comment, redditor timmytimtimshabadu offered an elegant proposal.
The new wall was no doubt a huge help in protecting the orphanage, he observed, but it made the place look like a prison.

“I think you should buy some paints and brushes and let the kids paint all holy hell over the inside of that wall. Make it look like a fun place to be, and safe.”

He added: “Maybe save a place [for] the reddit guy.”

“I think it’s a good idea,” Hardwick responded. “Something everyone can enjoy, and they can make it theirs. Most children in Kenya don’t often get the chance to do art projects at school–especially with paint.”

So the Reddit alien may some day soon adorn the wall of a Kenya orphanage. It’s a cartoonish but fitting symbol of the children’s protectors, the thousands of redditors watching benevolently from behind their computer screens.