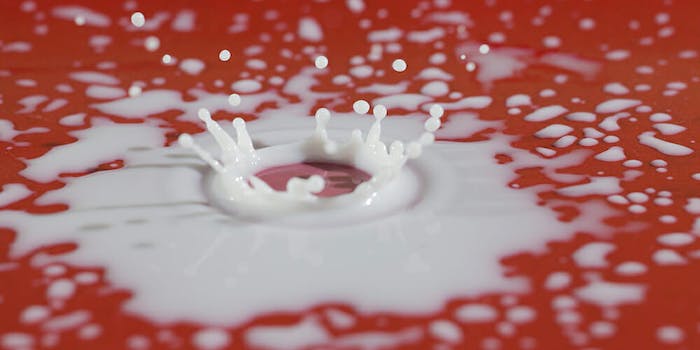 There's a reason she was drinking nondairy creamer.

A toxic boyfriend recently went on Reddit to get something off of his chest. He had been secretly switching his vegan girlfriend’s soy creamer and replacing it with dairy creamer for two months.

“I’ve been emptying the same soy creamer container and filling it with dairy creamer,” kitchenninja111 confessed in the r/TIFU (“Today I fucked up”) subreddit.

He wrote that his girlfriend of three years went vegan for health reasons, including that she gets acne from dairy products. He figured this couldn’t be true and that her teenage acne just lingered longer than normal.

“I thought I would prove to her that the whole ‘dairy gives me acne’ thing is in her head,” he wrote.

Now that the couple is living together, and she does all the cooking, he also eats a vegan diet. One of his tipping points was not being able to eat weenie mac and cheese.

“She’s a great cook but sometimes a man just needs some mac and cheese with cut up hot dogs,” he wrote.

Kitchenninja111 told his fellow redditors that he was unsuccessful in his attempt to catch his girlfriend lying. He initially planned to prove her wrong and then come clean.

“I was gonna do a big reveal, like ‘Surprise! You can eat whatever you want!’” he wrote.

But surprise! His girlfriend broke out, exactly like she said she would.

“It is BAD. Like insects about to hatch out of her face bad,” he wrote of her boyfriend-induced acne. He now plans to “quietly” throw the dairy out so her skin can “go back to normal.”

“I feel bad but on the other hand I was doing it for her own good!” he wrote.

One redditor replied that he should have just done his own cooking.

“I‘m living vegan too, my boyfriend doesn‘t and he is cooking his own food,” the user said. “I would definitely dump someone who betrayed me in that way.”

Others informed him that he could have made a longtime vegan sick by abruptly changing her diet. He was called a “monster” and abusive, with many saying that they would dump their own partner if they did something like this. The general consensus was that he needs to come clean to his girlfriend.

But replying to someone in the thread, the redditor wrote that despite the backlash he is still not going to tell her.

The Daily Dot has reached out to kitchenninja111.