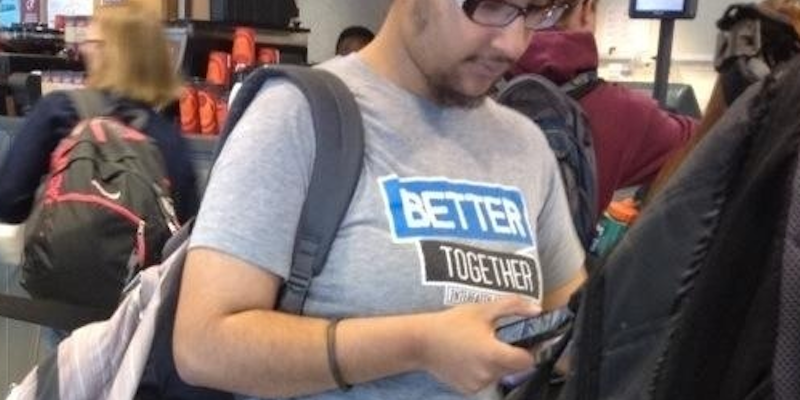 Woman with beard teaches Reddit a lesson about acceptance

A practicing Sikh woman with facial hair wrote a poignant note to redditors after her photo was submitted to the site's "funny" section.

Facial hair: Some girls got it. It derives from a condition called hirsutism, and if you’re a practicing Sikh, you wear it proudly.

That’s the lesson we’ve learned from Balpreet Kaur, the eloquent woman whose photographed portrait sparked an unlikely four-day discussion on Reddit about tolerance, acceptance, and living your life with your head held high.

On Sunday, redditor european_douchebag posted a photo he took of a woman standing in line at an airport. The woman was wearing black pants, a grey t-shirt, black glasses, and a black turban on her heard.

She also wore something that stood out to european_douchebag: a few patches of black hair that extended around her chin, cheeks, and upper lip. To put it bluntly, she had a beard.

European_douchebag took that as something notable and posted the photo to r/funny, along with a caption that read “I’m not sure what to conclude from this.”

Other redditors knew exactly what to make of the photo, however, and those individuals acted accordingly, letting european_douchebag know that he’d photographed a Sikh girl, one who was “Amritaari regardless of the pressures put on [them] by western society to conform.”

They called european_douchebag a “douche,” downvoted the post, and told the redditor that it wasn’t cool to post the photo. It was a rough go for european_douchebag, whose r/funny post was hardly perceived as funny.

That’s when Kaur showed up and told everybody that she was the woman in the photo. And the way she did it put on full display just how tolerant, patient, and accepting a person she is.

“Hey, guys,” she wrote. “This is Balpreet Kaur, the girl from the picture. I actually didn’t know about this until one of my friends told on Facebook.

If the OP wanted a picture, they could have just asked and I could have smiled :) However, I’m not embarrased or even humiliated by the attention [negative and positve] that this picture is getting because, it’s who I am. Yes, I’m a baptized Sikh woman with facial hair. Yes, I realize that my gender is often confused and I look different than most women.

However, baptized Sikhs believe in the sacredness of this body – it is a gift that has been given to us by the Divine Being [which is genderless, actually] and, must keep it intact as a submission to the divine will. Just as a child doesn’t reject the gift of his/her parents, Sikhs do not reject the body that has been given to us. By crying ‘mine, mine’ and changing this body-tool, we are essentially living in ego and creating a seperateness between ourselves and the divinity within us. By transcending societal views of beauty, I believe that I can focus more on my actions.

My attitude and thoughts and actions have more value in them than my body because I recognize that this body is just going to become ash in the end, so why fuss about it? When I die, no one is going to remember what I looked like, heck, my kids will forget my voice, and slowly, all physical memory will fade away. However, my impact and legacy will remain: and, by not focusing on the physical beauty, I have time to cultivate those inner virtues and hopefully, focus my life on creating change and progress for this world in any way I can.

So, to me, my face isn’t important but the smile and the happiness that lie behind the face are. :-) So, if anyone sees me at OSU, please come up and say hello. I appreciate all of the comments here, both positive and less positive because I’ve gotten a better understanding of myself and others from this.

Also, the yoga pants are quite comfortable and the Better Together tshirt is actually from Interfaith Youth Core, an organization that focuses on storytelling and engagement between different faiths. :) I hope this explains everything a bit more, and I apologize for causing such confusion and uttering anything that hurt anyone.”

She explained that “the over arching principal is this body is a tool for service” and that Sikhs intend to maintain and care for it as it’s presented in its original form.

“In this sense, going to the hospital is okay,” she wrote. “Eating medicine is fine, because it maintains the body. A sick ailing body can not serve as efficiently as an able. My hair doesn’t stop me from being normal or doing service so its not a hinderance.”

Redditors immediately rushed to her side, calling her “beautiful” and “awesome.”

“May the divine in your continue to guide and protect you,” redditor Tossy19818 added. “You responded so beautifully because you are a magnificent energy field who is here on this physical plane to teach. I shed tears reading your response.”

Even european_douchebag was swayed by Kaul’s response, reporting Wednesday afternoon that the two talked and the redditor now “see[s] how stupid this post was in the first place.”

“Yeah it’s not something you see everyday but that doesn’t make it funny,” european_douchebag wrote.

The redditor even had the presence of mine to post a follow-up thread on r/funny after having time to pick up some perspective.

“I know that this post ISN’T a funny post but I felt the need to apologize to the Sikhs, Balpreet, and anyone else I offended when I posted that picture,” european_douchebag wrote. “Put simply it was stupid.

“Making fun of people is funny to some but incredibly degrading to the people you’re making fun of. It was an incredibly, rude, judgmental, and ignorant thing to post.

“I’ve read more about the Sikh faith and it was actually really interesting. It makes a whole lot of sense to work on having a legacy and not worrying about what you look like. I made that post for stupid internet points and I was ignorant.”

Lessons on ignorance, faith, and judgment. Who says redditors are all about seedy strippers and WTF?