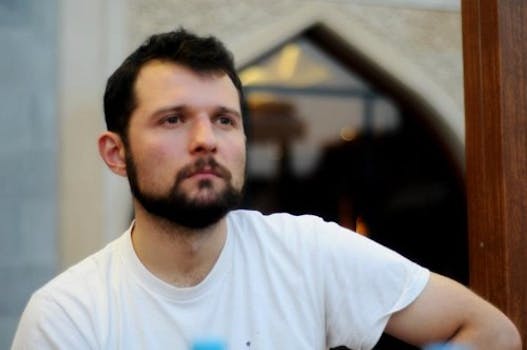 Reddit provides a peek behind the curtain of an oppressive state

Political activist and former prisoner of the state Adnan Hajizada answered questions in a rare interview on Reddit.

In Azerbaijan, the police probably haven’t heard of Reddit. But political activist and former prisoner of the state Adnan Hajizada was being careful, regardless.

“I am not saying anything here that I wouldn’t be able to say to their face,” Hajizada wrote during his AMA (“ask me anything”) on the social news site Monday.

Hajizada represents an early version of the type of Internet-powered political activism that helped spawn revolutions in the Middle East.

In 2009, the American-educated Hajizada released a short video that satirized corruption in the Azerbaijani government. The country is nominally a representative democracy, but its human rights record has come under severe criticism, as has the legitimacy of its elections.
And somewhere in the country’s halls of powers, the wrong person saw Hajizada’s video. A group of men, who Hajizada claims were government thugs, assaulted him and a friend at a local cafe.

In no time, Hajizada was locked up in state prison, where he languished for 17 months. It took international pressure to finally see him released.

That was the backdrop for Hajizada’s fascinating AMA earlier today, where a worldwide audience got to peek behind the curtain of Azerbaijan and glimpse a world likely well outside their own experience or even imagining. At a time when Reddit’s power as a citizen journalism platform has been very much in the news, Hajizada’s AMA is a perfect representation of the site’s—and the Web’s—value and reach. For a short time Monday, Reddit’s audience of 35 million visitors had a one-on-one chat with a political activist a world away.

“Can you describe the conditions more?” redditor Tawrtczak asked.

The facility was surrounded by 3 stone quarries, so the whole day huge machines would be cutting through the rock making a horrible noise akin to the one on horror films. The byproduct of stone cutting is white dust, and with a little wind the dust was up in the air, in our food, eyes, ears, beds etc.

Food was inedible, made from old and spoiled products. For example when you ate the rice or some other porridge you could break your tooth on stone that was in your plate.

There were regular outages with water. No heating, ventilation or AC in the buildings. During the hottest days of July I couldn’t sleep for a week, because the moment I would go to sleep my body temperature would rise, my face would sweat and the sweat burned my face so I would wake up.

Was it worth it? Did that YouTube video affect any kind of change, one redditor wondered?

Most of the activists in Azerbaijan have lost hope for any positive change. We do not hope we persevere. I did this not because I thought that it might change something. I did this because I think that it is my duty as an active and privileged citizen to speak out when something is very wrong with your society. If had to do this all over again, I would spend more time, on making more videos, so when I am jailed, I won’t be sorry for all the time that I have lost.

To Reddit’s credit, Hajizada’s post currently holds the top spot at r/IAmA, beating out an interview with the creator of the popular 1990s kids show The Ren & Stimpey Show. Check out Hajizada’s  full AMA here.