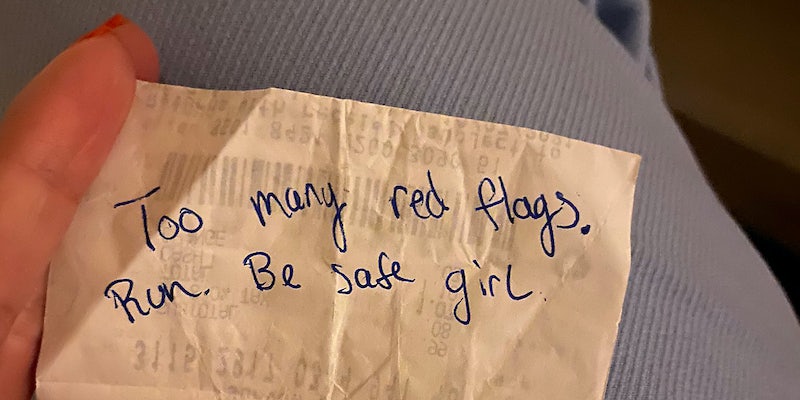 ‘Too many red flags’: Man warns woman about her date in a secret note, tells her to ‘run’

She said the man sitting behind her passed her the note while her date was in the bathroom.

When on a terrible date, sometimes all one needs is a sign to leave. A woman shared a note she received from her “guardian angel”: the man sitting at a table next to her, warning her to “run” from her cringe-worthy coffee date.

“Too many red flags. Run. Be safe girl,” the note, written on a crumpled CVS receipt, reads.

The woman, Twitter user @Hadia__S, said the man gave her the note while her date was in the bathroom.

“I had coffee with a guy yesterday. When he went to the bathroom, the gay guy sitting behind me passed me this note,” she captioned the tweet with an image of the note.

“I can’t help but wonder how bright red those flags were for a complete stranger [to] notice AND write a warning note. Big yikes,” one user said.

The woman replied: “As bright as my red nails.” She later elaborated on some of these “red flags” in the replies.

She said that the two did not see eye-to-eye on DaBaby’s recent homophobic remarks and that the guy was a fan of Kevin Samuels, a controversial YouTuber and lifestyle coach who makes content on dating and gender roles.

“I recognized the red flags, but I wasn’t in danger, so I stayed, because of course I had to debate him. I’m sure my guardian angel was exhausted and was like ‘BITCH, LEAVE!’” she said.

“There were a few other GLARING red flags that I won’t mention, but don’t worry, I would have recognized them with or without the note. But the note was greatly appreciated and added some laughs to my night. There won’t be a second date,” she said.

The viral tweet garnered over 30,000 retweets and 370,000 likes. The replies were flooded with users commending the man for giving her the note.

“I’m not saying believe him sis but…..BELIEVE HIM SIS,” one user urged.

“He gave up a CVS receipt to save you. Not only did he risk his personal business exposed, he gave up thousands in coupons. Heed his words,” another user replied.

“This is what allyship looks like not that nonsense of saying/doing nothing when you can clearly see that the man is dangerous, then coming on here to cry ‘not all men,’” a third said.

But the tweet also sparked debate in the replies about the man’s eavesdropping on their conversation.

“Tell him to mind his business,” one user said.

Others suggested that those defending the woman’s date or criticizing the man’s note were simply feeling insecure about their own potential “red flags.”

“If all the straight men in the comments weren’t the same type of dude this gay man was warning her about they’d mind their own business. if you know it’s not about you then move on. but you know.. a hit dog hollers,” one user said.

“Judging by a good portion of the comments on this post, a lot of men are fearful that their red flags are easily detected,” another said.

The Daily Dot reached out to user @Hadia__S for comment.