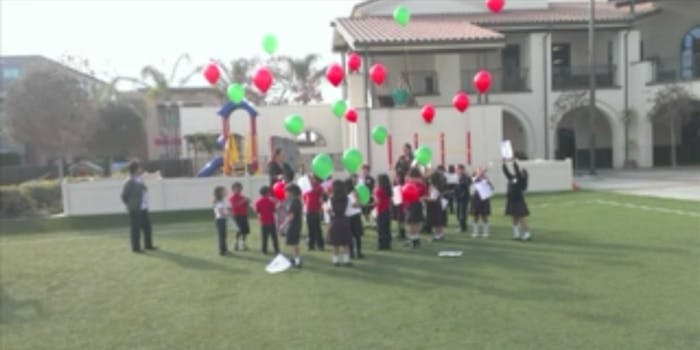 A girl's Christmas list floated north, but not to the North Pole.

What would you do if a child’s Christmas wish literally fell out of the sky and into your hands?

On Tuesday morning, 23 kindergarten students at St. Rose of Lima School in Chula Vista, Calif. collectively wrote letters to Santa, then attached them to red and green balloons and released them into the sky. One little girl named Joie had a hard time getting hers to ascend, so her teacher, Julie Garay, ripped off a corner of the letter. It finally took off, and floated north. But not to the North Pole.

Some 15 miles away in San Diego, Terry Hardin was leaving work when he noticed a red balloon floating towards him. He grabbed it and read the note:

Dear Santa, I would like to have a mermaid doll with a bow for Christmas. Thank you. Love, Joie.

He felt a sense of duty to this girl, so he took to Facebook to find out who she might be. He also felt more of a personal connection: His mother, who passed away last year, was also named Joie. With just a few details to go on, he was eventually able to connect Joie with Mrs. Garay’s class in Chula Vista.

And so because of this balloon having a mind of its own, much like the French film The Red Balloon, Hardin went out and bought a Little Mermaid doll for Joie, and they both received gifts this year.

This already seems like a better movie than Love Actually.