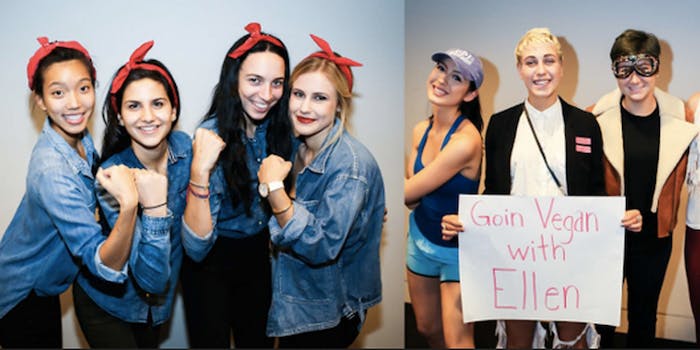 Women have been encouraged to dress scantily on Halloween, but the times are changing.

In the Halloween scene of the cult classic Mean Girls, we see main character Regina George’s father sobbing as she leaves the house wearing a sexy bunny costume. Presumably he’s crying because he has no choice but to let his little girl out into the world in an outfit that leaves little to the imagination—because that’s what women do.

This movie scene is far from fiction: Young women—and even girls—all over are encouraged to dress scantily on October 31st. The #ReclaimHalloween movement is trying to change that, one empowering costume at a time.

The #ReclaimHalloween movement kicked off last fall thanks to the efforts of women’s empowerment organization So She Did. Founder Victoria Song wanted to flip the way that women are expected to dress on the ultimate dress-up day, and started small by asking women to dress as their personal female heroes and share photos with the hashtag.

“We’ve all heard and read about how Halloween has notoriously been a holiday where women are viewed as objects and retailers market ‘sexy xyz’ costumes to them,” Song wrote in a piece she published earlier this month on the Huffington Post. “We present an alternative. We’re asking women to #ReclaimHalloween, and celebrate their own version of sexy: women who live from the inside out.”

This year, #ReclaimHalloween has expanded and found a home with Greek organizations on 18 college campuses around the country, including New York University.

“Throughout my life, but especially since I’ve lived in New York City, I’ve watched too many friends struggle with their self-esteem and sources of confidence, and I’ve also been burdened with such issues myself, so the So She Did movement really spoke to me on a personal level—that we need to start investing in ourselves from the inside,” Samantha Donat, Vice President of Recruitment  for the NYU chapter of Delta Phi Epsilon sorority, told the Daily Dot in an email.

Donat plans on dressing up as UFC champion Ronda Rousey, and says other women will be going as J.K Rowling, Sophia Amoruso, Mother Teresa, Hillary Clinton, and others.

NYU’s #ReclaimHalloween party is being held Friday evening in partnership with the Pi Kappa Epsilon fraternity, and Donat expects member of five other sororities and four other fraternities to attend. In a twist, the men at this particular event are also being encouraged to dress up as powerful women.

A member of PIKE wrote the following on the event Facebook wall:

Hey everyone! Hope you’re all getting excited for the event tomorrow. I just wanted to remind everyone that we’re encouraging guys to not only come attend the event, but to dress up as inspiring female role models as well! You may be wondering why we’re asking something like this, and it’s pretty simple: Given the amount of negative attention that men, especially fraternities, have been receiving in the news lately when it comes to their treatment of women, we wanted to show a very different side to all of this bad press. By demonstrating our support for the So She Did movement, we’re hoping to reverse the stigma surrounding men’s attitudes towards women and women’s empowerment — because we’re equally as inspired by all of the strong women in our society today. So come out tomorrow, show your support, and help us all ‪#‎ReclaimHalloween‬!

Though this isn’t really about the men, Song is more than happy for them to take an active role. “We’re trying to say that women empowerment doesn’t need to be this suffocating thing…If guys can partake in a way that’s light, but is still getting the value and mission across, then I think that’s fine,” she told the Daily Dot via phone. She also added “I find that when men share their voice and get involved, all of the sudden, it feels really safe and comfortable for women to get behind it too.”

Song admitted that it was perhaps a bit unfortunate that the only way for some women to feel secure about making a statement is to have men involved. However, she did say that the male support eased the women’s burden of “selling” their idea and making people listen.

Song recalled her undergraduate days at Yale where she dressed up as a sexy cop and attended the Sigma Phi Epsilon Halloween party. It was the party of the season and says “there was validation to be invited to their party.” But today’s SigEp’s have changed their tune a bit, signing onto #ReclaimHalloween.

SigEp member Ben McCoubrey told the Daily Dot in an email that his organization “jumped at the opportunity to promote the campaign alongside Spook’d, which is our annual Halloween party (happening Saturday night). Spook’d is definitely our highest-profile event of the year, and we wanted to put the publicity to good use. By throwing our support behind #ReclaimHalloween, we wanted to encourage our campus to recognize the impact that female figures have had in shaping our world.”

McCoubrey said that unlike NYU, the invite did not specify whether or not men should participate, but was sure to note, “But even if they don’t participate in costume, we hope that men at Yale will engage with the movement and recognize that support for female figures should be included in any celebration within our community.”