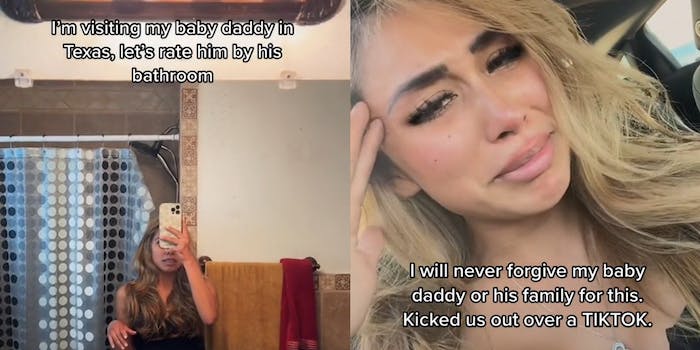 ‘Kicked us out over a TikTok’: Woman says her ‘baby daddy’ kicked her, her kids out after she rated his bathroom online, sparking debate

A TikToker says the father of her child kicked her out of his home after she rated his bathroom for an online trend.

In the video that has more than 719,000 views, @bannedd.shenellaradonich shows the state of her “baby daddy’s” bathroom, with multiple toothbrushes, no soap, hair clippings, and a dirty toilet.

“I don’t even know what to think, but what the fuck,” she says while in his bathroom.

She did not end up giving his bathroom an actual rating, saying that he’s only her baby daddy and that she can let other women rate his bathroom.

In a follow-up video, she says her baby daddy and his family kicked her out of their home for putting their bathroom on blast.

“So I just did this trend, but I was going to clean it, and they took it the wrong way,” she says. “We literally just got in an accident. Drove here from California, and they literally just kicked me and my kids out.”

She’s crying in the clip and a child is in the backseat of the car.

“I will never forgive my baby daddy or his family for this. Kicked us out over a TikTok,” the text overlay reads.

Her follow-up video received even more views than the first. It has 2.5 million views.

Some commenters said her baby’s father was in the right after she roasted his bathroom online, with one top comment on her initial video accusing her of making up the trend to “humiliate” him.

“Look at the trend she did! It’s not even her place to be doing that no matter how ‘untidy’ the bathroom is,” one commenter wrote.

“Crazy that disrespecting not only him, but his whole family and the home they live in on social media didn’t turn out positive,” another said.

“It ain’t about being ‘dirty,’ it’s about videoing their private space and putting it out for the world to see,” a third added.

However, the incident appears to be divisive as some thought he took it too far.

“They are embarrassed and they should be,” one wrote. “She’s not in the wrong. She was going to clean it too which isn’t her job!”

“Y’all think his response was justified? If it was clean it woulda been fine he’s embarrassed. She didn’t disrespect him,” another commenter wrote.

The Daily Dot has reached out to @bannedd.shenellaradonich via Instagram direct message regarding the video.