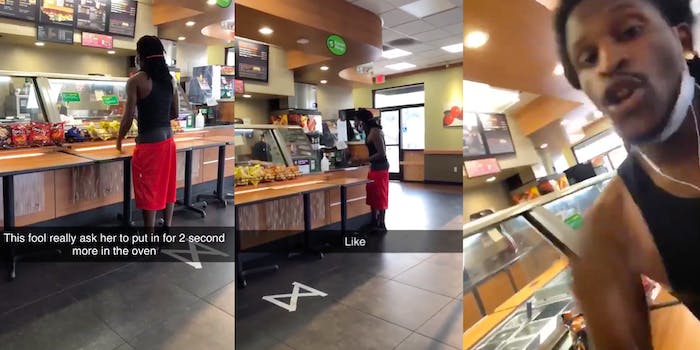 The rapper also threatens to physically harm the person recording the video.

A video of a California rapper, who goes by BlueHunnidss, accosting a Subway worker while she assembles his sandwich has gone viral.

In the video, he later turns to the woman recording and threatens to physically harm her. The video was uploaded on Sep. 16 and has racked up over 41,000 views in under 24 hours.

At the beginning of the video, what he is saying to the employee is barely audible. But the text over the video suggests he is becoming increasingly more difficult as he raises his voice. “This fool really asked for her to put [it] in for 2 second more in the oven,” the text reads.

He also seemingly picks which exact tomato slices he wants added to his sandwich.

As the video progresses, he becomes more audible. “The f*ck wrong with you dude?” he can be heard asking the worker.

The employee responds by asking “what else” he would like on his sandwich.

The rapper continues to accost the employee by telling her that salt and pepper getting added to the sandwich is “common sense.” He also complains that the employee failed to “do customer service” because he waited for “40 minutes” without being checked on.

“You’re doing one f*cking order at a time like it’s not common sense to you?” he says. “You need help, right? Exactly. It’s common f*cking sense. You need help. You can’t handle this job by yourself.”

He goes on to once again ask the employee if she is “stupid.”

The video then cuts to him with his mask under his chin, less than six feet away from the woman recording, saying he is going to “slap the sh*t out of” anyone who touches him. He continues to get closer to the woman, identifying himself as BlueHunnidss.

“I will slap the sh*t out this lady if she touches me again,” he proclaims. “Point, blank, period. That’s exactly how it’s goin’ go.”

He continues to accost the recorder as she tries to order her food and doesn’t stop until he leaves the Subway.