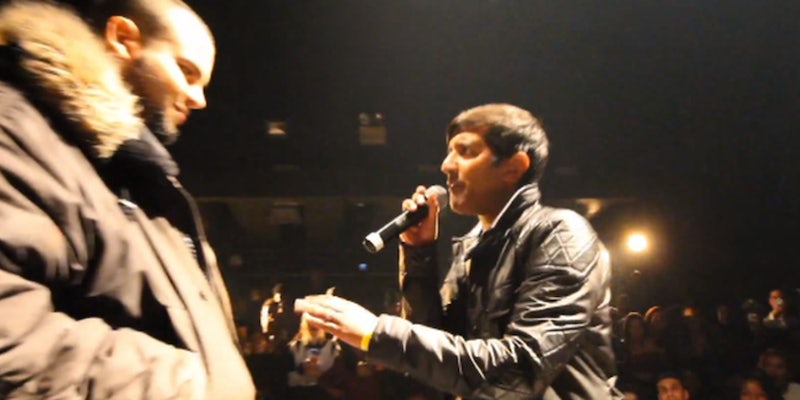 During rap battles, there’s often an unspoken rule that nothing is off limits.

During rap battles, there’s often an unspoken rule that nothing is off limits. But during one battle event Monday at the Jump Off in London, that theory was put to the test.

A rapper by the name of Lighte the Boombox Genie was riffing with female MC D’Klastro, and offered this verse:

“No sexercise, bitch. After this, in the alley, you gonna get raped.”

Who knows if Lighte would have said the same thing to a male opponent, but the camera then pans to the crowd, which voices its disapproval. “It’s a battle,” Lighte protests, before daring someone in the crowd to do better, even though his opponent is still onstage.

BBC Radio 1 DJ and host Nihal Arthanayake, who was one of the judges, then jumped on stage to take him on, asking, “Didn’t you have a mum, didn’t you have a sister, why are you so dumb?” He ends the battle by making a fat joke at Lighte’s expense.

Today, Arthanayake told Mother Jones: “I’m not a white knight (guess I’d be a brown one anyway), nor a hero, nor a feminist. Just a husband and a father who has spoken to many victims of domestic violence in my job as a phone-in host for the BBC…I just thought about the women in my life and that the male MC had betrayed rap music by resorting to something so base and disgusting. I’m not a prude, I grew up on rap music. But raping a woman as a battle lyric—that’s just nonsense.”

While it’s admirable that Arthanayake voiced his dissent, it’s unfortunate that D’Klastro didn’t get to respond on her own. After he and Lighte were onstage, she was no longer in the battle, and no longer had the space to voice her own rebuke.