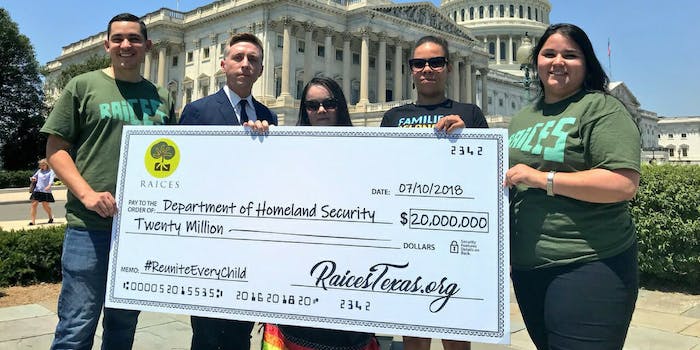 They're going along with the government's roadblocks to reunite families.

The Texas nonprofit that garnered millions in donations since last month’s viral Facebook fundraiser against the Trump administration’s family separation policy is knocking on the president’s door with an extra-large check for $20 million.

On Tuesday, San Antonio, Texas-based organization Refugee and Immigrant Center for Education and Legal Services (RAICES) hosted a conference on Capitol Hill with $20 million in hand, calling for the Department of Homeland Security (DHS) to reunite approximate 2,500 children separated from their parents under Trump’s “zero tolerance” policy.

Under the zero-tolerance policy, adults entering the U.S. with children are detained, leaving the children to be placed in child detention centers or with sponsors by the Office of Refugee Resettlement (ORR). Last month, a federal judge ordered the Trump administration to reunite families with children younger than 5 years old by Tuesday, while families with older children are expected to be reunified before July 27, a 30-day deadline. However, the administration is only expected to have reunified half of the more than 100 children identified under 5.

With the $20 million check, RAICES wants to pay for the bonds of mothers in immigration custody, so they may be able to expedite the process of reuniting families and “help the administration comply with its court ordered obligations,” according to a press release for the conference.

More than 1 million people donated over $20m and their message is clear: reunite the families

Through its 24-hour People’s Filibuster, RAICES is calling upon Trump and the DHS to accept the payment to cover bond for at least 2,000 mothers. The filibuster was being livestreamed on Facebook, though its Twitter account is reporting that the filibuster and livestream were shut down by secret service.

.@RAICESTEXAS has been removed from Pennsylvania Avenue in front of the White House and pushed out of Lafayette Park.

Hey @realDonaldTrump we’re leaving Capital Hill now and en route to the White House with a check of $20m to pay bail bonds for over 2,000 mothers.

Why continue with this brutality? Let’s end this now.#ReuniteEveryChild#PeoplesFilibuster pic.twitter.com/9ZfjP1Up2T

“This is a human rights abuse, and we must continue to hold the administration accountable to their stated plans of reuniting every last one of these children with their families. Judge Sabraw should appoint a special master to take over this process. We need answers, timelines, and details regarding reunification and we won’t rest easy until we know these children are back with their loved ones,” Castro said in a statement.

We’re waiting for answers. @JoaquinCastrotx has been doing what he can to reunite all the families. The administration has proven incapable of doing so.#ReuniteEveryChild #PeoplesFilibuster pic.twitter.com/42P5OTzq48

“People are donating because their hearts feel it, and they want to reunite families with their children” @SenSchumer calls on the administration to #ReuniteEveryChild as part of our offer to the administration of $20m to pay bail bonds for as many mothers detained as possible pic.twitter.com/eWsJiGfb06

RAICES received donations from more than a million people across the U.S. since Charlotte and Dave Willner and Malorie Lucich launched a Facebook fundraiser last month that quickly went viral. At the time, Charlotte said they were inspired to do something after seeing the viral photograph of a 2-year-old girl in pink, staring up at and crying for her mother as a border patrol agent patted the woman down.

In an email to the Daily Dot, Lucich shared that 535,000 people had donated more than $20.6 million through the Facebook fundraiser, with people donating from every state and across political parties. Last week, RAICES reportedly paid the bonds of eight parents with children in custody and has circulated a bond request form across national legal services organizations to offer up additional bond funding.

However, reuniting families is more complicated than just making bond. Lucich said that ICE won’t accept bond payment unless it has information of where the bondee will live, contact info for the person picking up the bondee, and travel arrangement documents. Only when a parent is bonded out and living in a stable residence does ORR initiate reunification.

In those cases where bond cannot immediately be made, RAICES is paying commissary funds to allow parents to call their children. RAICES is also looking into starting a fund to cover travel costs for sponsors or parents having to travel to pick up the child from ORR custody.

“RAICES is dedicated, and uniquely positioned to take on the task of paying bonds for parents separated from their children, one by one. But it doesn’t have to be that hard. RAICES will do it, but the administration forced us into this position, and we demand that they end this now,” RAICES executive director Jonathan Ryan said in a statement. “If they don’t, we’ll continue our work. We will write every single individual bond check. The administration’s actions have already put a moral stain on the United States, and failure to accept this bond check will only delay and put reunification at risk.”