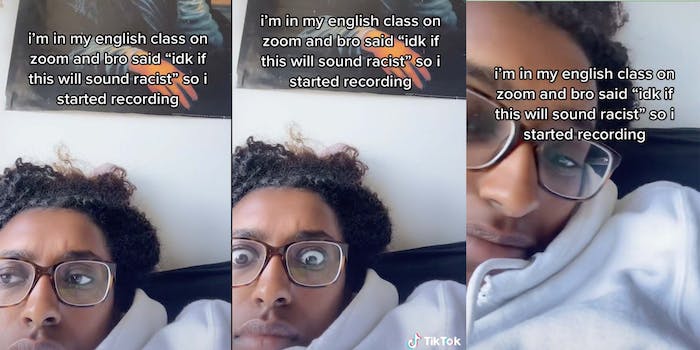 ‘I don’t know if this will sound racist’: Zoom classmate says Black people are poor and aggressive in racist TikTok

In a TikTok posted this week, user @naomemesfin recorded her classmate saying that a “typical Black person” is “very poor” and “aggressive.” Immediately after the comments are made, someone else on the Zoom asks where they got those ideas about Black people.

The student says he watched a YouTube video that said that “you have to skip classes to be Black.” The offending video has received more than 344,000 views on TikTok since being uploaded this week. In her TikTok bio, @naomemesfin says she’s 19 years old and from the Washington, D.C. metro area, which indicates that this likely occurred during a college class.

In the comments section of the video, @naomemesfin said that the class was discussing redlining, a racist practice that historically denied mortgages in and near neighborhoods where Black people lived.

When the class began discussing race more broadly, the classmate said “I don’t know if this will sound racist,” so @naomemesfin started to record him.

“If anything this shows that anti-Black racism is certainly not an exclusively American or white problem,” commented @its.still.alex.

@thotism420 commented that @naomemesfin’s classmate was on a “racist rant.”

“I have no energy left to be mad,” commented @nothingbutaer. “I’m just disappointed.”