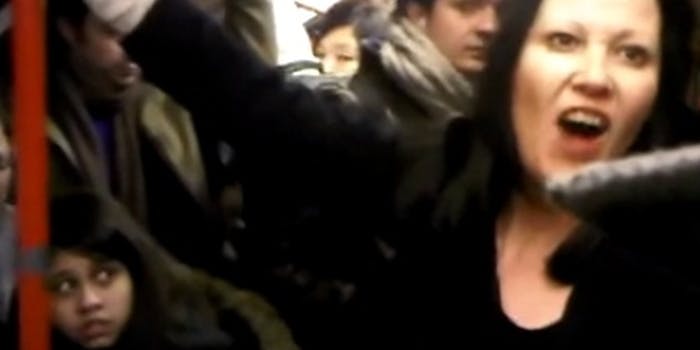 Jacqueline Woodhouse, whose drunk and racist tirade on a subway went viral on YouTube, has been sentenced to five months in prison.

The 42-year-old woman pleaded guilty “to causing alarm and distress” earlier this month for the Jan. 23 incident. She was sentenced Tuesday to 21 weeks behind bars, though she can be released in as little as 10 weeks, The Daily Mail reported. The sentence also includes a five-year public transportation ban while Woodhouse is inebriated.

This isn’t the first time Woodhouse has been in trouble with the law for public racism. In December 2008, she was fined for harassing a man on the train over whether or not he had paid taxes.

“Anyone viewing it would feel a deep sense of shame that our citizens could be subject to such behaviour who may, as a consequence, believe that it secretly represents the views of other white people.”

The video in question was uploaded by fellow rider and concerned father Galbant Singh Juttla, who told U.K.’s Huffington Post in January he posted the video for punitive purposes.

After the video received considerable media attention and hundreds of thousands of views, Woodhouse turned herself in. She told police she did not remember the rant, but recognized herself on camera, The Telegraph reported.