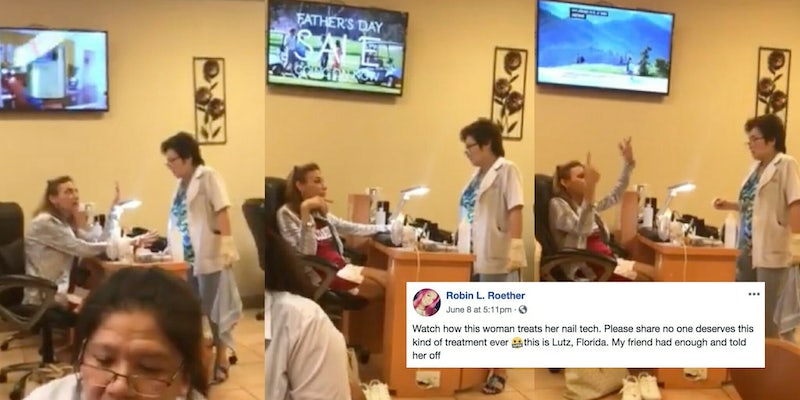 BRB, waiting for this woman to claim she was only racist because of the nail polish fumes.

The community of Hillsborough County, Florida, is supporting a local nail salon after a series of viral videos showed one of the salon’s regular customers going on a racist rant and berating the salon owner, telling her that her staff needs to “learn English” and that the owner’s language “sounds nasty.”

In two videos shared on Facebook by user Robin Roether, a customer at Bali Nail Spa in Lutz, Florida, complains that she can’t understand what the nail technicians are saying. She then complains to the shop owner, Karen Vu, that if “they don’t understand the language [English] they should go back to their country, period.”

As Vu tries to calm the customer, telling her that she can’t say that, she continues to complain to Vu, later telling her that she’s not tipping. She goes on to say, “Don’t move to America unless you know English, OK? Or are willing to learn, that’s part of moving to the United States.” Even after saying several other nasty comments to Vu, Vu puts on the woman’s top coat and tells her it’s no problem.

That’s when the customer says that Vu sounds nasty, that her “language sounds nasty,” and that she sounds like she was “born out of a fucking hermit crab.” Still, Vu continues to try and diffuse the conversation.

Toward the end of the video, the woman recording from her massage chair tells the ranting customer that she’s being nasty, saying, “You asked my opinion a minute ago and I’m fucking telling it to you, you don’t call them hermit crabs.”

After more back and forth between the two customers, the ranting customer tells Vu that she’s not getting paid, to which Vu is heard replying, “No problem. You can go, no problem.”

Roether wrote on Facebook that she hadn’t taken the videos, but a friend had. “My friend had enough and told her off,” Roether wrote.

Together, the videos have garnered nearly 2 million views, with thousands of reactions and shares. Viewers of the video have responded kindly, supporting Vu and denouncing the behavior of the ranting customer.

“What a disgraceful drunk bitch, I would have done the same! Kudos to your friend for sticking up for that nice lady,” one user commented.

“Umm it took a while for someone to say something. If that happened in NYC that vile pos [piece of shit] trash would be out in a street in a heartbeat!” another commenter chimed in. “What kind of garbage piece of nothing someone must be to be this way. Poor lady she tried so hard to please her and stay nice. I won’t even call her a human being—she is trash.”

According to ABC Action News, Vu doesn’t appear to be taking the experience to heart, nor do the nail technicians in the salon. She told the station that the ranting woman is a regular customer and that she “sometimes acts unpredictably.” She said she felt sorry for the woman and the other customers who were affected as a result of her comments.

“I don’t mind what she said because she doesn’t have control over her mind,” said Vu.

The commenter who questioned how long it took for someone to step in does have a point—within two videos across five to six minutes, the person recording doesn’t step in until the end, allowing this customer to spew racist sentiments for what may have felt like an eternity. Of course, waiting until the woman dug herself into a deep, racist hole could have been strategic for the person recording the video, allowing the woman to speak long enough to implicate herself and show that she isn’t just “having adverse side effects to Ambien” or whatever the racist excuse of the day is.

And while being an ally and stepping in to stop racial injustice might seem like a simple decision, there’s no way to tell if this woman would retribute against Vu and her staff instead. Vu is seen trying several times to calm the woman and agree with her, or at least calmly dissuade her from saying things about her staff’s ability to speak English, showing that she’s mitigating the situation and trying to find an easy exit for all employees and customers involved.

Other customers of the salon have expressed offense at the women’s behavior, with one Florida resident driving 30 minutes to the salon to give the customer’s nail technician the tip she never received from the woman, ABC Action News reported.

“I just wanted to come over here tell them they don’t deserve to be treated the way that they were from that lady or for anyone else for that matter,” Jennifer Verge, the tipper, told the station. “God just spoke to me and told me to bring him what he didn’t get from the lady because he got gypped when he’s supposed to be paid for the work that he did and that’s unacceptable.”

ABC Action News reported that attempts to get comment from the two customers in the video were unsuccessful.