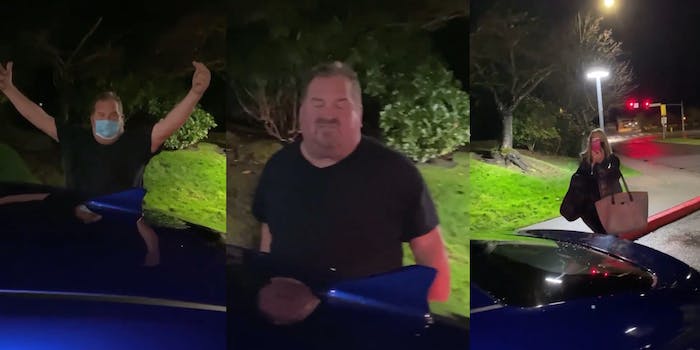 'Racist Joe' shouted insults as his 'Karen' wife threatened to have the driver banned from Lyft.

2020 is putting us through the ringer.

Along with wildfires, mass layoffs, and the ongoing coronavirus pandemic, it seems all the racists and “Karens” of the world are coming out of the woodwork this year. A Washington man joined the club after launching into a racist tirade against his Lyft driver, as shown in a video recently uploaded to Instagram.

The video, shared by user @davenewworld, shows a seemingly drunk man hurling racist insults at a Lyft driver, who goes by @davidthestudent11 on Instagram. The video begins once the passenger has already become belligerent, and the altercation appears to have begun over a face mask.

It appears that the Lyft driver required the racist man and his wife to don face masks or be refused service. Both are wearing masks when the video begins, but we’ve seen enough of these public freakouts to guess how things escalated. They likely attempted to enter the vehicle without masks and were refused service when things got heated. Perhaps they decided to put on masks after the driver told them to get out, but it was too late. They’d already revealed themselves, and the driver was no longer willing to transport them.

This is, presumably, where the video begins.

“Racist Joe,” as @davenewworld aptly nicknames him, goes full bigot straight out of the gate. He repeatedly calls the driver a “sand [N-word],” a vile, racist term for a person of Middle Eastern descent. When the driver calls him out for his language, Racist Joe takes it as a request for a lesson.

At this point, Racist Joe’s wife—a Karen by anyone’s standards—cuts her husband off—not because she is appalled by his language or his treatment of another human being, but because she is recording. And his repeated slurs really aren’t helping the couple’s optics.

“Joe, stop, I’m videoing. Stop, stop,” she says, grappling with her seemingly intoxicated spouse. She then steps away, leaving Racist Joe to his xenophobic mumbling, and continues filming the Lyft driver. The couple bungles a classic Karen threat by telling the man that he will never drive for Lyft again.

While Karen attempts to paint herself as a victim on camera, Racist Joe continues hurling insults the driver’s way. He calls him a “fucking stupid idiot” before threatening to “piss” in his vehicle. Thankfully, Racist Joe changes his mind before any urine hits the car.

The video ends shortly thereafter, with Karen still attempting to deflect blame. Racist Joe seems too wasted to string more than a few words together, but he still manages to hurl more racist slurs before the clip ends.

Commenters quickly rallied behind the Lyft driver, calling on Lyft, Uber, and Washington officials to identify the couple. Many people requested that Lyft ban the couple for life, and others are calling for their jobs.

Others leaned into jokes and insults to cope with the contents of the video. Racist Joe’s neck—or lack thereof—was a common target.

“I’d be mad if I ain’t had no neck either,” one commenter quipped.

“Why he look like that guy from 90 day Fiance?” another wrote. “Ol no neck havin.”

The Daily Dot has reached out to @davidthestudent11, who posted a shorter version of the altercation on his Instagram story.