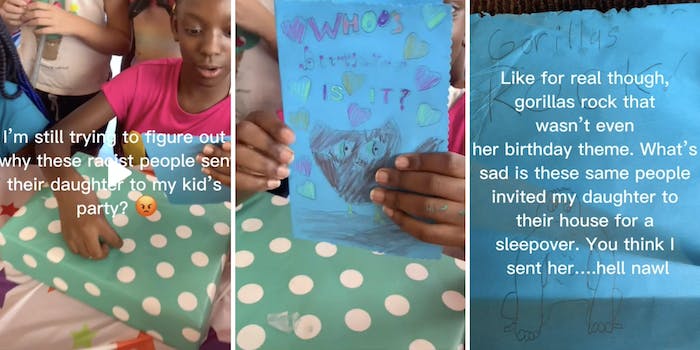 ‘The way my anger set up I would’ve been in jail’: Black birthday girl called a ‘gorilla’ in racist birthday card

'Who even drew this?'

A TikTok of a Black girl opening presents and receiving a birthday card with a racial slur is going viral.

The mother of the birthday girl, Shavonya Poole (@lifezamstyle) posted the TikTok on Thursday. “I’m still trying to figure out why these racist people sent their daughter to my kid’s party?” the text overlay reads. The clip shows the birthday girl named Zuri opening the card of one of her presents at her party.

“Did you hear the little girl laughing? My baby didn’t get it,” the text overlay reads.

Then the clip shows the birthday card, which also has a drawing of what seems to be a gorilla. “Like for real though, gorillas rock that wasn’t even her birthday theme. What’s sad is these same people invited my daughter to their house for a sleepover. You think i sent her ….hell nawl,” the text overlay reads.

“Who even drew this? Was it the kid, the mom, the dad or a sibling? It’s people like this that keep racism alive in this day and age.”

There’s a dark and racist history of dehumanizing and comparing Black people to gorillas or apes that can be traced to the racist pseudoscience of white Europeans thinking of Africans and Indigenous people as inferior, leading to slavery and colonization.

Unfortunately that harmful racism continues to this day. Even Dr. Seuss books featured only two Black characters ever and they were depicted as monkeys. In 2018, actress Roseanne Barr compared Valerie Jarrett, a Black woman who was one of the longest-serving senior advisors to President Obama, to an ape in a now-deleted controversial tweet.

In the comments, people stood up for Zuri and Poole. “We ride at dawn. Im sick of it,” one TikToker commented.

“The way my anger set up I would’ve been in jail,” another wrote.