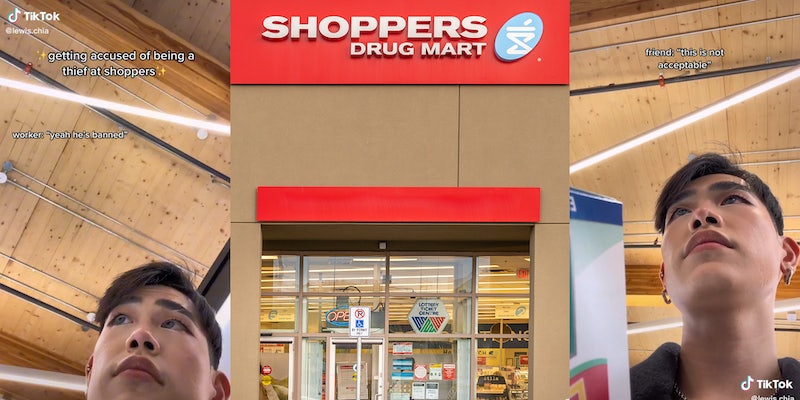 ‘This is a completely different person’: Creator says he was racially profiled, mistaken for alleged thief at Shoppers Drug Mart

'This is definitely a call corporate moment.'

An Asian shopper and TikTok creator says he was racially profiled at a Shoppers Drug Mart in Toronto after employees mistook him for an “Asian-fishing white man” who they allege had been stealing “thousands of dollars” worth of product daily.

In the video posted by TikToker Lewis Chia (@lewis.chia) on Oct. 16, he shows footage of a Shoppers worker telling him that “he’s banned,” saying that they have a picture of the person they allege had been stealing from the company. In the clip, Chia and his friend ask to see the picture, and claim that the worker “proceeds to show a pic of an Asian-fishing white man.”

“Does this look like me?” Chia asks in the video. His friend continues to ask the worker if they’re “being racist” and asserts that the person in the photo “doesn’t look like him at all.”

“This is a completely different person. You’re being extremely racist right now,” Chia’s friend says in the clip.

The workers then try to defend their decision to approach Chia, saying that the person “has been causing a lot of issues for the store” and stealing “thousands of dollars” of product every day.

“I think you should have been a little more certain before telling me that I’m banned from this store because that’s very clearly not me. Just because we both wear makeup doesn’t mean we’re the same person,” Chia tells the workers.

The manager tells Chia that there “may have been a big misunderstanding,” while another worker says that they thought he was the same person due to his earrings, even admitting that they now see that the person accused of stealing has a different piercing.

“Can he even come into the store without being accused at this point? Like if all three of you thought this was him?” Chia’s friend asks.

The manager continues to apologize to Chia for mistaking him for the man in the photo. Another worker explains that the man “keeps changing” his appearance, attempting to justify their mistake.

“I’m going to look like this for a while, so let’s not have this happen again, okay?” Chia says at the end of the clip.

@lewis.chia 10/10/22 – this was at the yonge + charles location, honestly didn’t think i would get racially profiled AND mistaken for a white man in 2022, @shoppersdrugmart ♬ original sound – lewis

The caption reads, “honestly didn’t think i would get racially profiled AND mistaken for a white man in 2022, @shoppersdrugmart please do better! i’m still waiting for HQ to get back to me so i’ll keep you guys updated.”

The video has reached over 5.6 million views as of Oct. 19, with commenters putting Shoppers on blast for how they approached Chia.

“They apologized but still very feels like they’re being defensive instead of just admitting their mistake period,” a commenter wrote.

“This is definitely a call corporate moment because this so unacceptable and what if they’ve done to others because they ‘looked’ like the guy,” another said.

Others praised his friend for “standing up” for him.

“I’m so glad you had a friend who was there with you to defend you the entire time. I am sorry this happened,” one user said.

“I love your friend for standing up that must have caught you so off guard,” another wrote.

“NOW THATS A FRIEND RIGHT THERE,” a third added.

The Daily Dot reached out to Chia and Shoppers Drug Mart via email.