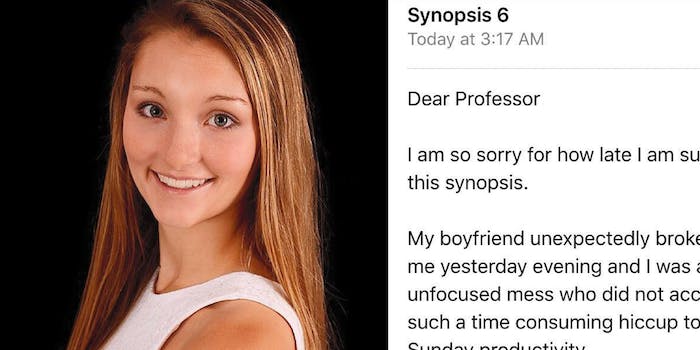 Homegirl is all of us.

Take 19-year-old Rachel Harriman, a student at Ohio State University, who decided to email her professor the excuse for why her assignment was so late instead of putting on a brave face and taking a deduction for lateness.

She, like many before her, was unexpectedly dumped by her boyfriend and the event threw quite the wrench in her schedule.

“I was a complete, unfocused mess who did not account for such a time consuming hiccup to affect my Sunday productivity,” she wrote to the prof. SAME, GIRL. SAME.

Harriman then shared the email on Twitter, because what is the platform even for if not to air your post-breakup grievances every now and again. And it struck a chord with thousands of people.

We’ve all been there—it’s an awful feeling, but the empathy she received probably helped her in return. Tens of people responded to the sad message as any good friends would: by calling her ex trash and offering to cheer her up (or even take her out).

here is my shoulder.

Harriman said even her professor seemed understanding in the reply she received.

“Well, life happens,” the email from the professor, provided to BuzzFeed, reads. “Seems like a good time to go to Europe.”

She ended up getting a B+ on the assignment, and the professor didn’t deduct points for her being late—happy day!

Well, kind of. Harriman is probably still recovering from the blindsiding breakup, but at least she’s able to find humor in her situation, and keep her grades up along the way.