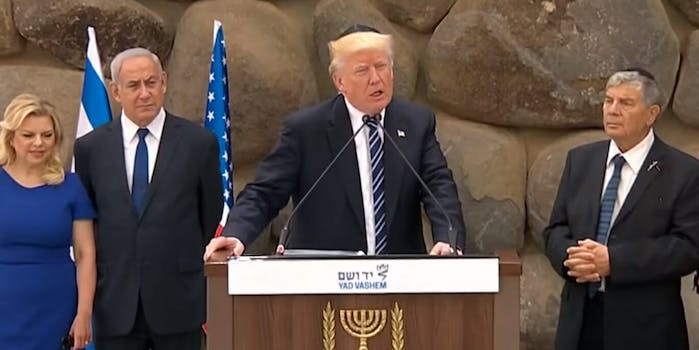 They called Trump's Charlottesville comments "so lacking in moral leadership."

Two months after the Donald Trump administration broke with 20 years of tradition by not hosting a dinner to celebrate the holy Muslim month of Ramadan, a coalition of rabbis will make sure the president doesn’t get a chance to not acknowledge the holiest days on the Jewish calendar.

After Trump’s response to the violence in Charlottesville in which he blamed “both sides” during the protest and said there were “very fine people” among the white nationalist groups who marched in Charlottesville, Ivanka Trump’s rabbi said he was “deeply troubled” by how Trump reacted to the anti-Semitism on full display. Now, even more Jewish clergy are holding Trump accountable for supporting “those who advocate anti-Semitism, racism, and xenophobia.”

That’s why the rabbis won’t hold their annual conference call with the president during the High Holy Days, which includes the Jewish holidays of Rosh Hashana and Yom Kippur.

“We have concluded that President Trump’s statements during and after the tragic events in Charlottesville are so lacking in moral leadership and empathy for the victims of racial and religious hatred that we cannot organize such a call this year,” four rabbinical groups said in a statement. “… We pray that President Trump will recognize and remedy the grave error he has made in abetting the voices of hatred.”

They also wrote: “Responsibility for the violence that occurred in Charlottesville, including the death of Heather Heyer, does not lie with many sides but with one side: the Nazis, alt-right and white supremacists who brought their hate to a peaceful community. They must be roundly condemned at all levels.”

Steve Fox, the executive director of the Reform movement-based Central Conference of American Rabbis, told Politico that it’s important for Trump to be a moral leader.