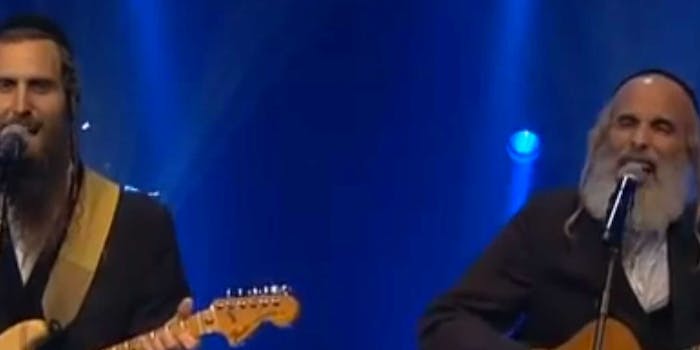 What is it that makes talent-show TV so globally appealing? Probably performances like this one, which brings together supposedly disparate cultures with lots of feel-good fanfare: rabbi brothers Aryeh and Gil Gat, of Jerusalem, covering Simon & Garfunkel’s “The Sound of Silence.”

The YouTube clip comes courtesy of Israeli reality program Rising Star, which has a novel format that’s bound to make it stateside sooner rather than later: judges and audience members alike electronically express their approval during an act and crossing a certain threshold of “likes” causes a screen to rise, revealing the musicians to their adoring fans.

Anyway, this take on a classic is operating flawlessly, from the duo’s formal wardrobe and slight accents to their guitar work and pitch-perfect vocals. And still, 11 percent of viewers refused to give these guys their due for this heart-swelling feat? They ought to be opening for Flight of the Conchords or something.