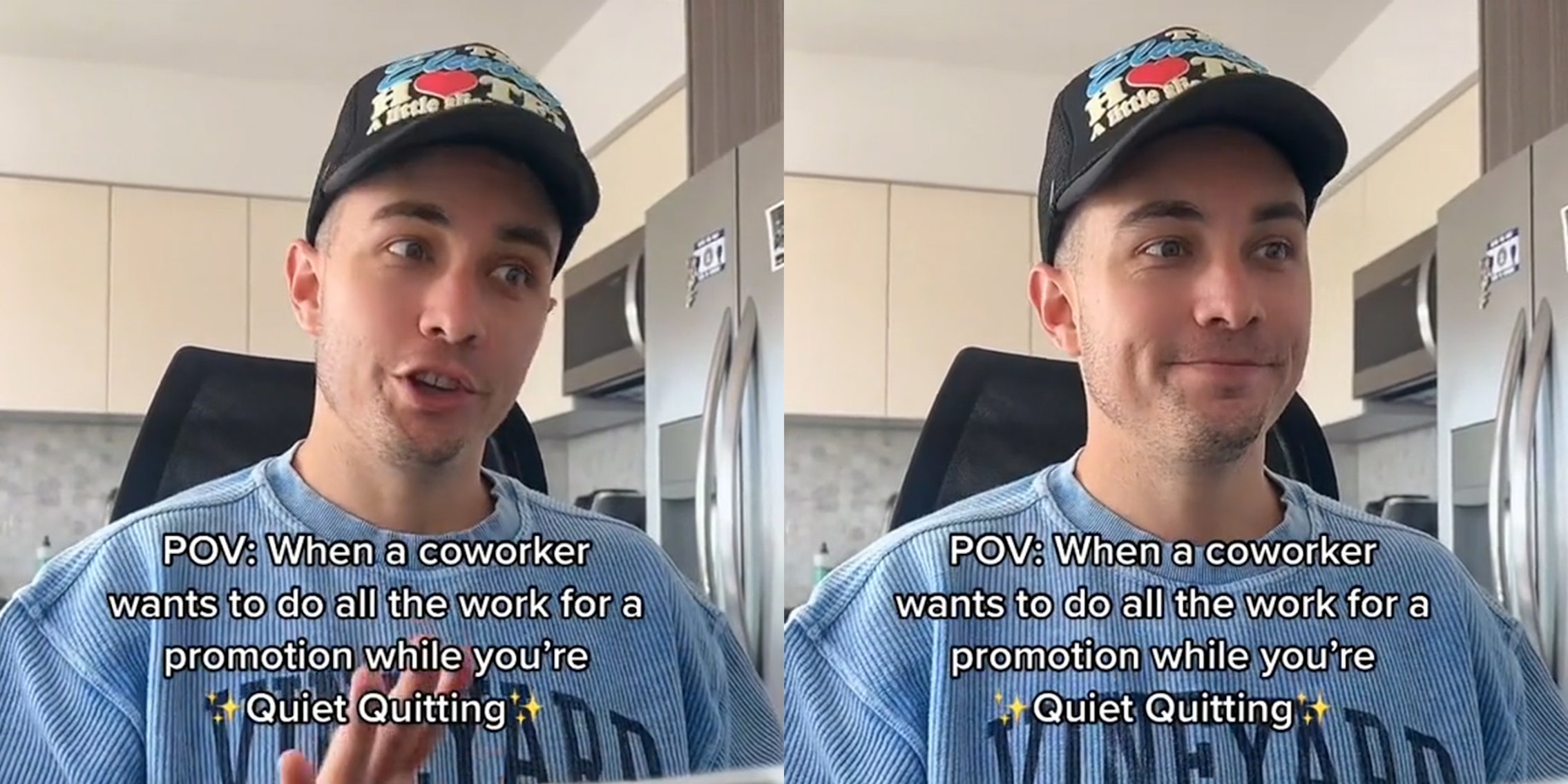 ‘The irony is I ended up getting a promotion over that guy’: ‘Quiet quitter’ mocks co-workers who are working hard for promotions, sparking debate

'They're scared of you but you're not competing.'

The “quiet quitting” trend continues as more and more users are posting their stories of choosing not to go above and beyond their job requirements.

The argument from these so-called quiet quitters (occasionally dubbed “acting your wage”) is that there is little value for going beyond job requirements when compared with its numerous downsides. These can include heightened stress, an increased workload, and frequently, a lack of additional compensation for extra work.

TikToker Cruz (@champagnecruze), who posts short comedic sketches to his page, recently made a video on the topic of “quiet quitting,” going viral in the process.

In a video with over 112,000 views, Cruz lays out a scenario in which a co-worker has asked to take on more work to receive a promotion, while, in contrast, Cruz is “quiet quitting.”

“We are good. We are good. You’re safe,” the audio accompanying the video states, implying that Cruz is more than happy to offer some of the workload to his overachieving co-worker and doesn’t think the two are in competition with each other.

In comments, some users reaffirmed the positive aspects of this idea, with many saying they were experiencing something similar at their current job.

“All the time,” wrote one user. “Calm down Mark I just want peace and quiet.”

“No but really like GO FOR IT IM YOUR BIGGEST CHEERLEADER,” added another.

“lol yessss they’re scared of you but you’re not competing,” shared a third.

Others said that taking on extra work to receive a promotion doesn’t always work out and can instead lead the co-worker to a worse situation than when they started.

“The irony is, I ended up getting a promotion over that guy because he burned out and I was just chill and polite,” claimed a TikToker. “good times.”

“Doing all the work doesn’t work,” alleged a second. “Ive tried it.”

While a 2019 survey found that 24% “of respondents said working hard would be the most help in receiving a job upgrade,” per CNBC, job experts note that working hard is not enough to get a promotion by itself.

“At a certain point you look around and realise, wow, everyone works hard at this level. Expertise and hard work just become the expectation, and will not help you up the ladder,” explained Jeff Shannon, an executive coach and author of Hard Work is Not Enough, to the BBC in 2021.

One of the real paths toward promotion, the piece claims, is navigating office politics—something that users online have complained about for quite some time.

In response to this reality and other factors, many are saying that they’re just going to stick with “quiet quitting.”

We’ve reached out to Cruz via email.

Update Sept. 12, 3:22pm CT: In an email to Daily Dot, Cruz shared why he thinks quiet quitting took off. “People are realizing that the corporate ladder doesn’t matter as much anymore. What we are noticing is that there is rarely a reward for hard work anymore so why do it? You work hard all year and when you are up for a promotion, you get a 5% raise. You can do the bare minimum now and find fulfillment in your life outside of work, while still getting that same raise. I think it has always been around but now with Tiktok and younger generations (Gen Z, Millennials) speaking about it has caused an uproar in Corporate America,” Cruz said.

“Tiktok is what I enjoy outside of work- Laughing, creating content and finding similarities between people. I’ve always been someone who prides themself on work-life balance but also someone who does their duties well. I think you can do both of those things without burning yourself out,” he continued.