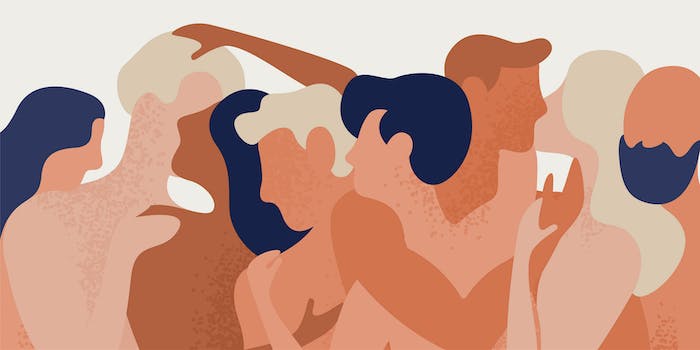 Polyamory isn’t a ‘political weapon,’ it’s a way of life for queer folks

“Welcome to a world where you can have sex with peoples wifes,” dril tweeted in 2011. “this iws wife sex world.”

Not unlike the Donald Trump-Twitter phenomenon “Dril’s Law,” dril predicted yet another online hot take years in advance. This time around, it’s Quartz writer Olivia Goldhill’s piece on polyamory, “Polyamorous sex is the most quietly revolutionary political weapon in the United States.”

It’s an, um, gripping headline, to say the least. But the article doesn’t tell the full story about polyamory, especially queer polyamory. So sit back, relax, and grab a cup of coffee. 2018 isn’t over yet, and we’re about to dive into a piece that’s so heteronormative, it might as well be called “Wife sex world is the most quietly revolutionary political weapon in the United States.”

wife sex world is the most quietly revolutionary political weapon in the United States https://t.co/ZnE5xeZZ1I

There really is a dril tweet for every bad online occasion

Goldhill’s piece opens with a line that’s sure to roll the eyes of every American sick of New York-centric culture takes: “To find polyamorists today, head to Brooklyn.” In peak gentrified Bushwick, Goldhill visits a casual, poly-friendly kinky mixer called “Tableaux.” The space is predominantly white, cis, and middle-class. To that end, polyamorists here “have no problem with consumerism,” and the political roots behind cisgender polyamory practices remain an ongoing undercurrent throughout the piece.

To a certain extent, polyamory is becoming more popular among cisgender heterosexual couples, and there’s a lengthy history to tackle there. But polyamory isn’t just a straight white person’s phenomenon. More than anything, I’m reminded of this line spoken by one source, a Black polyamorous Brooklyn resident named Chaele: “We don’t live in a vacuum utopia. White people get centered in everything.”

In this case, white, cisgender, and heteronormative voices are the center of Quartz’s story. Whiteness is seen as a default, and most interviews are with white people. Goldhill tackles racism to a certain extent, but it’s a passing thought in a much larger piece that avoids exploring the racist undercurrents behind sexual and romantic exclusion for people of color in the U.S.

In I’m With Driftwood, one gay New Yorker describes pre-AIDS Greenwich Village as “an incredible, incredible time of free love, open sex, and tolerance.” Modern-day New York isn’t quite like Greenwich, but polyamorous relationships are a staple in queer spaces throughout the city. While I’m not polyamorous per se, in that I’m not in many loving relationships—I’m just in an open relationship with my partner—many of our friends engage in poly relationships, from romantically dating multiple partners at a time to adorable polycule trios. It’s hard to ignore, in part because it’s such an incredibly important part of queer life in 2018.

One anonymous queer poly practitioner from Brooklyn reached out to me about the Quartz article, calling it “really weird and a bit disgusting” for largely focusing on “frivolous rich white straight people” over the queer and trans folks that spearhead modern polyamory practices. That anonymous source, who uses they/them and he/him pronouns, praised polyamory for letting them and their partner “explore unexplored parts of our sexual/romantic attractions and identities” and build “fulfilling relationships with other queer people.”

“I am Jewish and my partner is African American, the majority of our poly friends are trans and half are nonwhite, and as Brooklynites I can’t say that most of us would be able to relate to the content of the article or agree with it beyond certain very matter of fact elements,” the anonymous Brooklyn resident told me.

Instead of suggesting polyamory began with hetero communes and ended up in Brooklyn bars, it’s much more accurate to suggest that queer poly people see their sexual and romantic interactions as part of a larger queer experience of challenging the norms that permeate in cis, straight relationships. In other words, poly queers are not looking for belonging. They’re looking to exist independently from straight people.

I spoke to a trans woman named Jessie, who has practiced polyamory for around a decade. She believes the Quartz piece is hyperfixated on “assimilation” and not the social circumstances around polyamory. In other words, Goldhill ignores how polyamory gives queer people room to create their own family structures, as “being excluded from so-called ‘traditional’ family configurations leaves the door open to finding something else different that works.”

“It wouldn’t surprise me if it’s just the extent of [Goldhill’s] own bubble,” Jessie explained. “They probably don’t know any trans or queer polyamorous groups, and thus couldn’t reach out to ask them questions, sort of like how you knew to ask me about it because of your proximity to the community.”

“That,” she continued, “and I think talking to a bunch of radical socialists and anarchists probably wouldn’t jibe with the image of ‘they’ve moved past radical politics and have embraced post-New Age therapy culture’ that they were trying to present.”

To Goldhill’s credit, she doesn’t outright ignore queerness, racism, and discrimination in poly circles. She interviews a queer non-binary demigirl, notes that most poly women she spoke to identify as queer, tackles misogyny and homophobia among poly men, explores ableism against those who are neurodivergent, and touches on segregation in poly spaces.

But Quartz’s piece on polyamory is half-baked. It’s missing key sources and perspectives, ones that make room for American polyamory beyond a cis, white, middle-class lens. Where are the queer and trans stories? Where are the poly folks of color? Marginalized Americans were doing poly relationships long before it became cool, and they’ll be doing it long after Brooklyn hipsters start to leave polyamory behind.

but sure, it's a gun now, or somethinghttps://t.co/rDrPK8iKcv

All of those tinder profiles for straight couples looking for a third are so brave https://t.co/nXwDWs0b21

we should actually close-read this article because its completely wrongheaded framing belies the fact that it's a story about people using polyamory to afford housing and polyamorous landlords taking advantage of them in turn. it's wild https://t.co/ACZo8fTRyi

"Leon Feingold, an exceptionally tall, friendly polyamorist, eager to talk about his high IQ and his sexual philosophies" … and here you are, giving him a megaphone.

Polyamory is more than just a way to have a lot of sex. It’s how many queers bond with each other, build a way of life together, and form a sense of belonging and family, whether through sex or otherwise. Goldhill suggests polyamory is gradually seeping into the mainstream fabric that weaves youths’ lives, but to make that argument, she chose to leave marginalized people’s experiences on the cutting room floor.

“Frankly, polyam people, just like everyone else on the fringes, are not usual,” Jessie told me. “And that’s fine. That’s why people seek it out in the first place. You’re better off preserving their legacies than trying to do PR or market them, with all the messiness. The common humanity will shine through.”