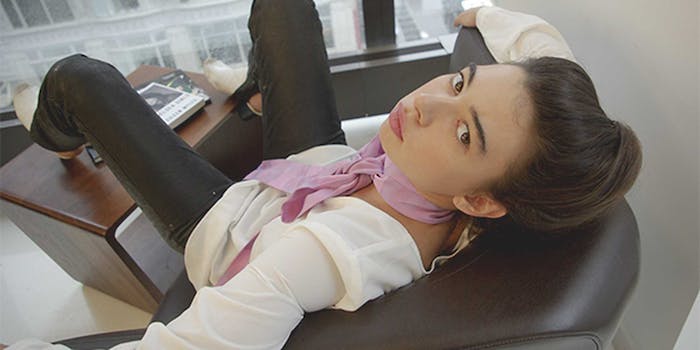 Christen Clifford's accessory is an act of rebellion against the shame and control of women's bodies.

What does a provocative feminist artist do after livestreaming images from the inside of her vagina? If you’re Christen Clifford, you take those images, put them on a pink scarf, and market them as the “Pussy Bow.”

Clifford told the Daily Dot that the 100 percent silk accessory, which she’s selling for $50 each, is a “natural extension” of her work: She’s tackled topics such as childbirth, harassment, rape, menstruation and other body-themed topics in various ways.

In February 2015, Clifford created the performance art piece Feminist Peep Show in which she talked to a crowd while showing them the interior of her vagina with a speculum. The show was an homage to pioneering artist Annie Sprinkle and her Public Cervix Announcement, where she invited audiences to examine said body part. And in September, as part of a performance hosted by the dance group AUNTS at New York’s Ace Hotel, Clifford used the wireless internal-camera vibrator Siime Eye to broadcast photos directly onto the walls of the hotel (and to viewers via Periscope) from inside her vagina, which served as the most direct inspiration for her latest venture.

The images that resulted from the latest performance surprised her; she’d seen her cervix before (an experience Clifford says “everyone” should try), but nothing like this. She explained, “I thought the colors would be a deeper red. The pinks and purples and even blues that resulted were a surprise. The light on the camera highlighted my vaginal mucus to that lavender blue.” The artist—based in Queens, New York—shared these images on her Instagram, Facebook and Twitter, with mostly positive responses.

Beyond art, it was the increasing attacks on reproductive rights and access to abortion that spurred Clifford to want to put her pussy around people’s necks. As she put it, “I want to fight the patriarchy with art.” She considers her Pussy Bow a timely call to arms in an era when a Colorado Springs Planned Parenthood clinic was recently the site of a deadly attack, and a woman in Georgia was arrested for inducing an abortion by taking pills. Clifford is even donating 10 percent of the proceeds to Planned Parenthood, an organization that’s especially meaningful to her because she used their services as a teenager, and has had an abortion herself. 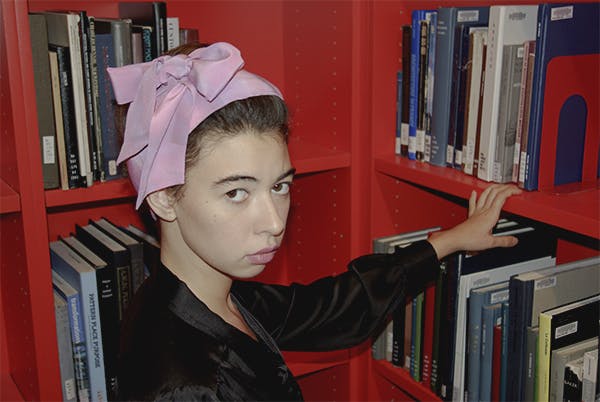 The erosion of women’s rights to control their own bodies, along with Clifford’s love of fashion, pushed her to experiment and use Margaret Thatcher’s wardrobe as her starting point.

“I had noticed that the pussy bow blouse was getting popular again the last few years. This fall it was everywhere. Portia DiRossi’s character on Scandal wears one in every episode. Clothes are intimate, touching your skin,” she said.

Clifford has written in the past about women’s relationship with clothing in an essay, Mother, Daughter, Moustache, featured in the 2014 anthology Women in Clothes. In the essay, she explored how clothing “is so gendered and problematic.”

But this time, instead of simply critiquing fashion, she decided to create her own items as an act of rebellion. “There is no equality without reproductive rights, there are no reproductive rights without respect for the female body, and there is no respect for the female body without knowledge of it. So the Pussy Bow is a feminist action disguised as a fashion accessory,” she said.

On the Pussy Bow Tumblr, she puts it bluntly: “For me, it’s just my pussy. And I’d love for you to wear it around your neck.”

The project also gave her a different view of her genitals, literally and figuratively. “The photo of my vagina’s interior represents so much to me,” she explained. “I explored this space as a child, I have had much pleasure in this space, but also penises I didn’t want or like were forced violently into this space. I gave this space to humans that didn’t deserve it, but I have also shared this space with love and excitement and even pushed tiny mammals out of this space. This space grounds me and connects me to my mother and her mother and her mother, which I think is pretty cool.”

The scarves themselves are custom made by Clifford’s friend Cassandra Neyenesch, and can be adapted depending on the wearer’s size preferences. Clifford proudly shared that “a dandy I know just ordered one as a pocket square.”

Who would Clifford love to see receive a Pussy Bow for the holidays? Donald Trump. Also: “Michelle Obama, Lena Dunham, Cecile Richards [President of Planned Parenthood Federation of America.] Anyone who loves pussy, anyone who loves equality and style.”

Naturally, the outspoken Clifford is also a proud wearer of her Pussy Bow. She adorned herself with one at a Friendsgiving holiday dinner, and when asked about her scarf, responded, “I made it. It’s a Pussy Bow. It’s printed with the inside of my pussy.” The response? “That’s awesome.”