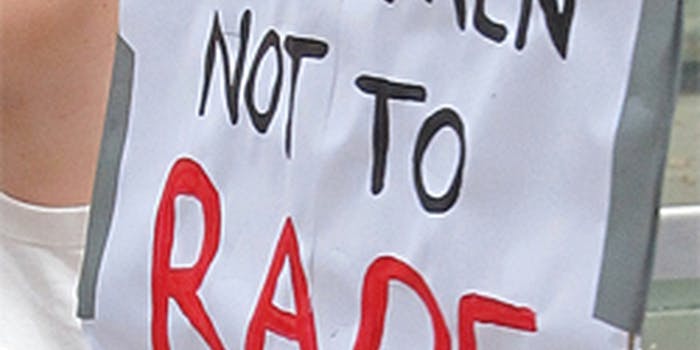 Dr. Rob Tarzwell says giving rapists a forum to confess is actually a danger to public safety, and it's "very likely triggering rape cravings in rapists."

Reactions to last week’s horrifying Reddit thread featuring the confessions of a serial rapist were mixed across the Internet. Even feminist website Jezebel weighed in in favor of learning from the testimonies of many of the contributors. But Monday, DrRob, an emergency psychiatrist, took to Reddit to explain why he felt the original thread itself was dangerous.

DrRob, whose real name is Dr. Rob Tarzwell, went on to describe how the thread could have serious long-term negative effects upon serial and would-be rapists. By providing them with an audience to witness their illicit desires and fantasies, Tarzwell explained, “the Reddit rape forum is very likely triggering rape cravings in rapists. It is also teaching rapists how to rape better.“

Tarzwell, an instructor with the University of British Columbia, is a frequent guest on the popular Caustic Soda podcast, and frequently debunks medical scares and misinformation. The misinformation in this instance, which made him “anxious,” was the fairly equanimous response from Redditors to the previous thread, full of confessions ranging from narrow escapes to the gleeful personal anecdotes of a self-professed serial rapist. Many Redditors echoed the takeaway of having learned valuable lessons about predatory thinking and behavior.

Not so, insisted Tarzwell. “To me, the rape thread is not much different than shouting ‘Fire!’ in a theatre. Free speech does deserve to get trumped by public safety sometimes.” As Redditors derailed into debates about the boundaries of free speech, other users pointed out that sympathy is hard to come by in a forum known for its high male population and its frequent misogyny.

Wegschmeissen12345 commented, “As a rape survivor,… I don’t want to see a rapist given a forum of people hanging on their every word while they recount their exploits. It makes me extremely angry. It also makes me feel less safe in the Reddit community at large.” Other victims agreed.

Rape victims and psychiatrists weren’t the only ones stepping up to discuss the safety issues involved. Respected fantasy author Jim Hines, who was scheduled to promote and discuss his new novel on Reddit, canceled his appearance after moderators refused his request that they delete the original thread.  Speaking in response to Jezebel’s stance on the thread, he explained:

“For me personally, the harm far outweighs the good.

It is important that we understand why people rape. But there are other ways to find that insight. Books, essays, research, and more….  In none of the stories I read were the rapists held accountable for their actions. Nor did they take responsibility. The pattern tended to be, ‘Here’s the story of how I raped this girl, and here are all of my excuses. I got away with it, but I feel really bad now of course, so give me cookies!’”

Hines pointed out that many of the anecdotes shared read like “rapists getting off on the chance to relive their crime,” a sentiment Tarzell echoed.  Tarzwell also went on to “wonder to what degree [the thread] might be normalizing rape, via the method of sharing stories.”

But it was Redditor Catnoon who had, perhaps the final word on that subject. “We shouldn’t be giving rapists and killers this type of attention and notoriety when we obviously give so little thought to the feelings of survivors,” she commented. “Why should they get to feel safe when I still don’t?”