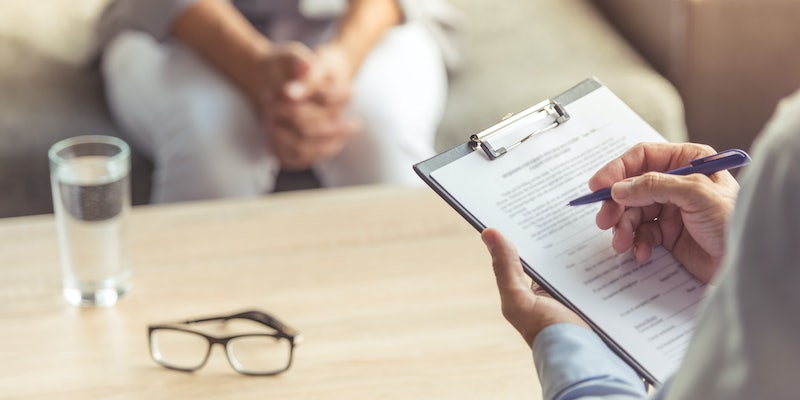 If the ACA gets repealed, psychiatric care—and the stigma surrounding it—will take an even greater hit.

The state of psychiatric care in America, and around the world, lives at the intersection of our debates about access to healthcare and our prejudices about mental illness. Many mental health advocates repeat a version of the phrase that if you break your leg you see a doctor, so it should be the same if your brain is “broken.” And yet many with mental illness are told to suck it up, walk it off, or that it’s not that big of a deal.

This makes for a sorry state at psychiatric care facilities, where both caretakers and patients are often ill-informed about what makes for good treatment. To revisit the analogy, we know that if you break your leg and your doctor doesn’t put you in a cast, they’re a bad doctor. But most of us don’t have the same understanding when it comes mental health. This is why Kit Mead is attempting to open the conversation by collecting reviews of psychiatric wards across the globe.

Psych Ward Reviews provides firsthand reviews from anonymous patients and staff, including details that may have affected treatment. Some are pretty jarring. “My mental health leaving the hospital was far worse than when I arrived (after a suicide attempt!),” said one patient of Washington Adventist Hospital in Takoma Park, Maryland. “While still medically unstable, they took me upstairs and put me in a chair in the hallway where I waited for more than 1.5 hours before someone admitted me. They then took me into a closed bathroom and strip-searched me. I could barely stand.”

The site also allows for patients to note other prejudices that lead to mistreatment, such as if they were abused because of their sexuality, gender identity, or race. “If you’re a minor and trans, forget about it. They will NOT respect you in any way,” said another patient of Prairie St. John’s Psychiatric Hospital in Fargo, North Dakota.

Mead attributes many of these negative experiences to an apathy toward mental health, which then gets compounded with other prejudices. “It doesn’t seem to be a commercial resource that people want to invest in,” they told the Daily Dot over email. “The quality of inpatient care and the human rights violations in psych hospitals don’t seem to concern as many people as it should.”

In 2012, the Center for Disease Control and Prevention (CDC) released a study that showed while many adults agree mental health treatment is effective, many did not think people are caring or empathetic toward people with mental illness. Those who didn’t agree mental health treatment is effective tend have less education, or come from cultures in which stigmas against mental illness are much stronger.

Morgan Shields, author of a study about psychiatric ward standards in the U.S., says that mental illness is not treated the same way as other health problems. “To be frank, the underlying reason is perhaps a societal apathy towards the disabled and/or individuals experiencing psychiatric distress,” she told the Daily Dot. “Unlike other areas of healthcare, psychiatric care serves individuals whose sense of reality can be and is discounted—this power dynamic has been difficult to penetrate. Therefore, unlike other areas of healthcare, self-advocacy is difficult.”

Of course, not all psych wards are bad. Many people credit their psychiatric stays with getting them on a healthier path. And that’s what Mead hopes to provide people coming to the site: information on how to get the best care and how to advocate for oneself—because not every psych patient looks the same, nor do they have the same needs or come from the same background.

While Centers for Medicare Services (CMS) may provide guidelines on psychiatric care and there are provisions in the ACA that encourage quality monitoring and accountability, these measures are basic measures and often don’t take into consideration treatment for LGBTQ patients, minors, patients of color, and others who have marginalized identities.

However, Shields and others are worried the ongoing movement to repeal ACA would be a huge step back for psychiatric care in America, and could exacerbate the problems already reported on Psych Ward Reviews. “I am concerned that we will not take that extra step, let alone improve the measures to include the patient experience and properly document harms,” said Shields.

Mead agrees. “Psychiatric health care is complex, but losing insurance is a bad thing. People might have to rely on potentially abusive support to cover health costs. Those who want psych care could lose access. So a repeal would have negative effects.”

#ACA expanded the scope of the Mental Health Parity Act, which improved access to autism-specific services. This is now in jeopardy. 6/ pic.twitter.com/fu09ax2lIS

Aside from an ACA repeal, there are also the ramifications of having a president that doesn’t appear to consider mental health a worthwhile issue. Though he has a vague call for “reforms” to mental health care on his website, he made numerous disparaging comments about mental illness throughout his campaign. Multiple times he equated mental illness with violence, and regularly calls opponents “crazy” or “basket cases” on Twitter.

“Nearly one in five American adults will experience a mental health issue in a given year. That includes a huge portion of Trump’s supporters—and an even greater group when looking at the national population,” wrote Lindsay Holmes for the Huffington Post. “Trump’s dialogue is completely damaging to many of the people he’s hoping to govern.”

Mead’s immediate goals are to provide for those seeking care, but they hope that Psych Ward Reviews could be a resource used for more oversight. “[The site] is the first step in getting data that says that the model isn’t effective and we need to move to community-based services,” said Mead. “They will also keep people a bit safer in hospitals while we seek alternatives. Even if policy doesn’t change, it will still give people an outlet for their experiences.”

And that outlet now looks more valuable than ever.