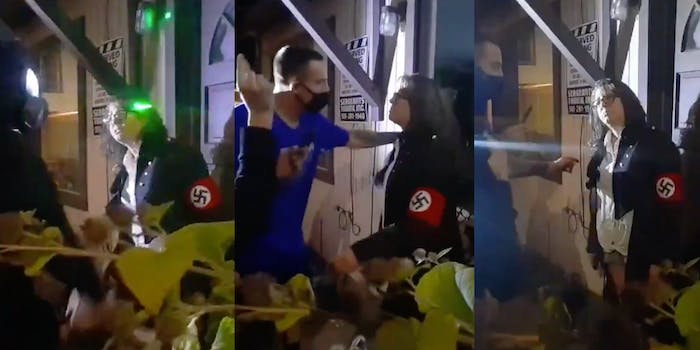 Protesters said the swastika was a 'threat of violence.'

A crowd of protesters in Portland, Oregon, approached a woman bearing a swastika at her doorstep Wednesday during a night of demonstrations, the New York Post reports.

The woman, who remains unidentified, stood in front of her house wearing a coat that included a swastika. A Twitter video shows a crowd of individuals approaching the woman and yelling at her to “take it off” and “go back inside.”

“Take it off, you Nazi fucking bitch,” one person says. To which she replies, “No.”

As more people yell at her to take it off, the woman says, “I haven’t said anything racist.” Crowd members move in closer and point at the swastika on her arm.

“What the fuck is on your arm you fucking dumb bitch,” one protester says.

The woman then shoves one of the individuals and another approaches her and says, “That’s assault.”

She says, “This is my property.” And the individual repeats, “That’s assault.”

The individual who the woman shoved says, “Go back inside your house before you get fucked up. Go back inside.”

Another individual approaches her and says, “Trust me, go inside,” while another says, “Your house will be fucking vandalized at the bare minimum.”

As the crowd continues yelling at the woman to “go inside,” an individual grips the swastika on her arm and attempts to pull it off.

Crowd members intervene and the woman stands in her house with her door open. An individual approaches her and says, “Go inside.” She replies, “I am, you idiot.”

Laura Jedeed, a demonstration attendee, posted a video of the incident on Twitter and said these demonstrations have been occurring since May 27, “when a group of BIPOC Portlanders occupied the Justice Center steps.”

“People have been protesting against police brutality and for Black Lives Matter every night ever since,” Jedeed wrote in a message.

Jedeed said protesters saw the woman standing on her doorstep wearing the Nazi coat and took it as a “threat of violence.”

“It was a warm evening, not coat weather,” Jedeed wrote. “It’s pretty clear to me that this woman threw the coat on as deliberate incitement.”

Jedeed said the woman eventually complied with the crowd’s demands for her to remove the coat after the video.

“Last night the protest returned to the East Precinct and someone spraypainted A Nazi Lives Here on the wall of her apartment,” Jedeed wrote. “Her window was also broken.”

Remy Holladay, a protest attendee, wrote on Twitter that the woman threatened protesters.

The Portland Police Bureau, who did not immediately respond to the Daily Dot’s request for comment, issued a statement on the protests, detailing arrests and a timeline of events.