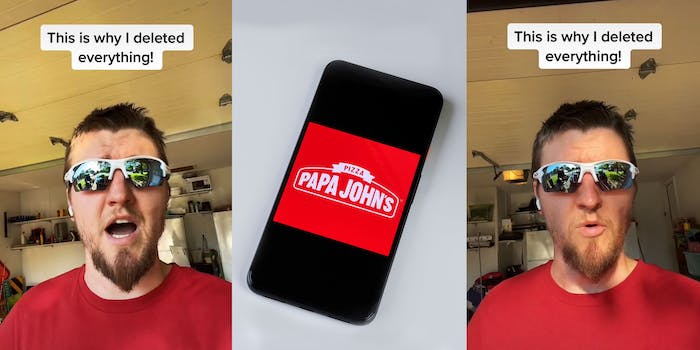 'I'm still Professor Pizza, and y'all are still my pizza pals.'

Professor Pizza deleted all his Papa John’s-related content and says he will no longer be posting about the pizza chain on TikTok.

The TikToker, known as Professor Pizza (@_professorpizza_) on the platform, has about 10,000 followers and is well known for posting about his job working at Papa John’s.

Professor Pizza previously went viral for explaining why he thinks customers should never order pizza through GrubHub. He also chronicled the long wait for a $70 order to be picked up by DoorDash.

But no more, he says. Those videos, as well as his other videos about Papa John’s, are gone from his TikTok page. In a recent video, he says he deleted that content because he was “given some choices.”

The TikToker claims that the pizza place where he worked “didn’t seem too concerned” with his or other employees’ concerns. He doesn’t explicitly name Papa John’s, but it can be assumed that’s who he’s referencing based on previous content.

Due to the alleged lack of concern, Professor Pizza says he decided to stop giving “free advertising” to his employer—or any other company, he adds.

“I chose freedom,” the TikToker says. “In a world where our freedoms are being taken from us every single day—some more than others—I want the ability to put the content out that makes me happy, that I like.”

Professor Pizza says he still wants to post content that his followers enjoy, but his decision to let go of his Papa John’s content freed him of all limitations. Now, he doesn’t have to worry about what kind of songs or what kind of language he uses in his videos, he says.

“I don’t have to worry about anyone’s happiness but my own,” he says. “And if you can’t understand that, then you need to hop along. I’m still Professor Pizza, and y’all are still my pizza pals.”

The TikTok video caused speculation among Professor Pizza’s viewers, with some saying he must have gotten fired from his job.

In another video, the TikToker refuses to reveal his job status.

“Maybe I quit, maybe I got fired—y’all will never know,” Professor Pizza says in the video. “But what you can count on is that I love my job.”

The Daily Dot reached out to Professor Pizza via TikTok comment and to Papa John’s via email.