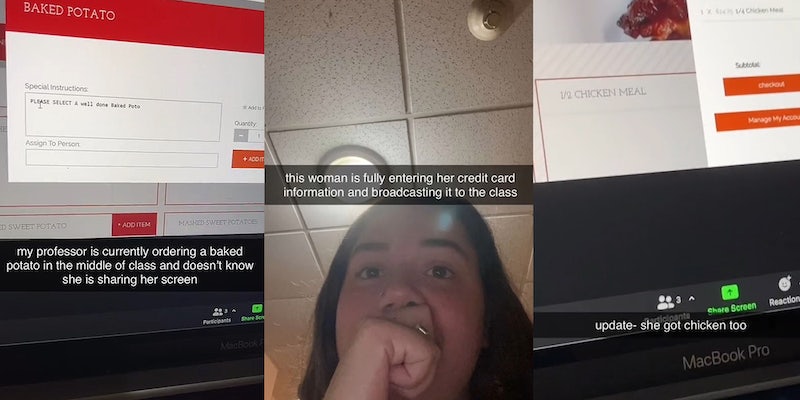 'why didnt you tell herrrrr.'

In a viral TikTok video, a student reveals how her professor unknowingly shared her screen on Zoom while ordering a baked potato online.

User Colleen Parisi (@colleenparisi) records her computer screen where her professor is seen ordering a “well done baked potato” through screen-sharing on Zoom.

“My professor is currently ordering a baked potato in the middle of class and she doesn’t know she is sharing her screen,” Parisi wrote in the text overlay.

The camera then focuses back on Parisi’s Zoom window as she makes a shocked face.

“This woman is fully entering her credit card information and broadcasting it to the class,” she added via text overlay.

Parisi clarified in the comments section that only she and one other student witnessed the situation. “Neither of us said anything but she eventually noticed and made a joke about it lmao,” she said.

The video has amassed over 727,000 views since it was posted on Sept. 20, with viewers in the comments cracking jokes.

“Now everyone can have baked potatoes,” one viewer joked.

“I would have been like ‘so are you ordering potatoes for all of us oooorrr???’” a second quipped.

Others called out Parisi for not mentioning the situation to her professor.

“why didnt you tell herrrrr,” one user questioned.

“u could’ve told her when she was typing that whole message ab a well done potato,” another suggested.

Some viewers also shared their own stories of professors unknowingly sharing their screens in remote classes.

“In my corporate training class we watched our trainer order his whole lunch,” one person wrote.

“My CYBERSECURITY professor logged into Canvas while sharing the screen,” a second stated.

“We all got to watch my trainer have a team’s chat, talking shit about the most annoying guy in class and nobody knows if he saw,” a third commented.

In a later comment, Parisi offered an unfortunate update. “She said she never ended up getting the meal i was sad for her i really wanted her to enjoy her baked potato,” she wrote.

The Daily Dot reached out to Colleen Parisi via TikTok comment.