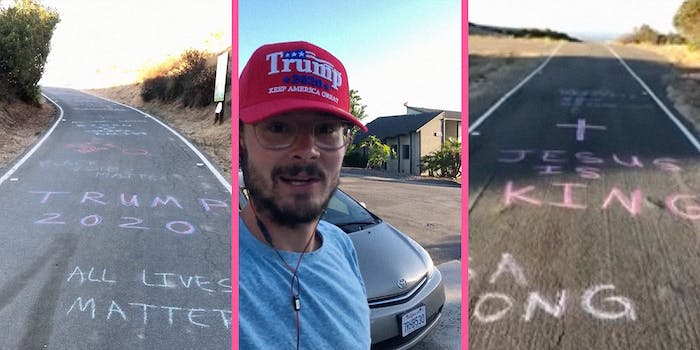 One man’s meltdown over finding “Black Lives Matter” chalked on a walkway in Laguna Beach went viral this week—and not for the reason he wanted.

The unidentified man filmed a 5-minute video showing how he and his family addressed “a bunch of Black Lives Matter propaganda” they came across on their walk.

Wearing a Trump 2020 hat, he takes his camera back down the path, first highlighting a faded note that “Black Lives Matter.”

“I just about threw up,” the man says.

To “counteract” the existing words, the Trump supporter filled the path with dozens of notes of his own: “All Lives Matter,” “Jesus Is In Control,” “CNN Is Fake News,” and “Trump 2020,” among other notes.

As he continues down the road, it becomes apparent that a handful of pro-BLM remarks triggered him into writing everything from political messaging to religious declarations to QAnon conspiracy theories.

He even chalked messages about he believes Hillary Clinton tortures babies and PizzaGate, the completely debunked conspiracy theory that claimed Democrats were running a human trafficking ring out of a pizzeria in Washington, D.C.

“They want to go to the streets?” the man asks. “We can do it, too. My kids have really nice chalk.”

As the man continues along what he called his “yellow brick road to freedom,” he runs into other members of the community who share their support for what he’s done.

“Just stand for your truth and you’ll find that more people are going to stand with you. Silent majority,” he says. “And while Trump is not my savior, while Jesus Christ is my savior, I do believe that he’s holding people to account.

“So I’m going to support him in that aim, because Jesus isn’t going to do it out the middle of thin air. That’s why he works through us. Jesus lives in us. Jesus lives. Never forget it. He rose. He gave his blood for us. We are made of him. And here you go: ‘Jesus is in control.’ Always.”

The episode didn’t sit well with Redditors in the PublicFreakout forum who called it “American hypocrisy.”

“These people have been brainwashed into wanting an oppressive fascist government while chanting about ‘freedom,’” one user wrote.

“How are they the silent majority if they never shut up and aren’t the majority?” another asked.

It isn’t immediately clear when the video was first recorded, but several redditors recognized the man from a March incident in which he was denied entrance to a Trader Joe’s in Texas for refusing to wear a mask.

“Thank goodness fuckers like him are leaving California,” remarked u/communist1871.

“Yeah but can you send that trash somewhere else though,” u/Citizen001 replied. “It is hard enough already trying to make Texas a better place.”