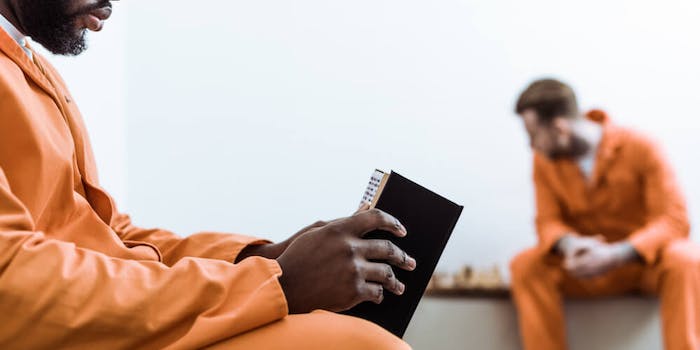 Inmates are charged 3 cents per minute to read.

Prisons across West Virginia are reportedly requiring inmates to pay about 3 cents per minute for accessing ebooks through tablets, which amounts to an hourly rate significantly higher than an hourly wage for inmates.

Since February, the West Virginia Division of Corrections and Rehabilitation has been under a contract with Global Tel Link (GTL), which provides inmates with free tablets, Reason reports. To read on the tablets, inmates will be charged 3 cents per minute for books from Project Gutenberg, a reservoir of 60,000 public domain ebooks that are free to the general public.

According to 2017 records compiled by Prison Policy, the range of hourly wage for inmates in West Virginia is 4 cents to 58 cents. If an inmate reads an ebook for an hour using this service, they would pay $1.80.

Other services on the tablets will also cost inmates: They’ll be charged 25 cents to send a written message and 50 cents for a photo message. Playing games and listening to music is discounted now at 3 cents per minute but will regularly cost 5 cents per minute.

The Appalachian Prison Project, a nonprofit that deconstructed the contract earlier this month, argues it’s a case of “profit over people.”

“The cost to read a book far exceeds the cost to purchase one,” the project said. “And that cost will be especially unfair to new readers and people with dyslexia.”

According to the contract, the tablet program was piloted at Saint Mary’s Correctional Center and was a “success.” The February agreement extended the program to 10 other correctional facilities in the state. The contract also claims that some of the services on the tablet are free but doesn’t specify which ones. (GTL did not immediately respond to the Daily Dot’s request for comment.)