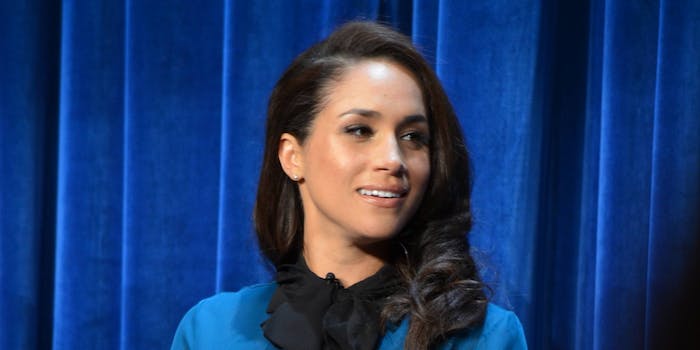 'This past week has seen a line crossed.'

In a statement posted by Kensington Palace to social media, Prince Harry is decrying the “sexist and racist” abuse aimed at his girlfriend, Meghan Markle, a biracial American actress on the show Suits.

This is the first official confirmation of their relationship, which became a popular topic among celebrity gossip sites last week. The statement harshly criticizes the public reaction to their relationship, saying that “the past week has seen a line crossed” with abusive comments from internet trolls, and people trying to invade the couple’s privacy.

“Some of it has been hidden from the public – the nightly legal battles to keep defamatory stories out of papers, her mother having to struggle past photographers in order to get to her front door; the attempts of reporters and photographers to gain illegal entry to her home and the calls that followed.”

Kensington Palace has issued a statement this morning about the harassment currently being experienced by Meghan Markle and her family. pic.twitter.com/EuFZ4fmUIj

The palace’s message is unusually forthright compared to typical public statements from the royal family, emphasizing the emotional hardship caused by invasive press coverage of the Prince’s private life.