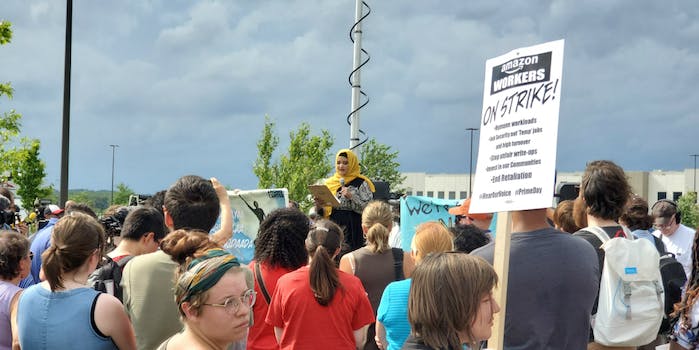 The view of Prime Day from Amazon’s warehouse strike

On the fifth-annual Amazon Prime Day, and while consumers are scrolling deals, Amazon workers across the country are demanding change and accountability. And in Shakopee, Minnesota, they’re walking out.

Amazon Prime Day is the yearly summer sale from Amazon that has been growing in scale every year since it started in 2015. Prime Day has gone from a day of online deals to a two-day sales event, with a Taylor Swift concert to kick it off. For many consumers, it’s a chance to get some things off their wishlists on the cheap, but for Amazon workers, it’s become a different story.

In a Facebook group for Amazon warehouse employees, the lead up to Prime Day has been an anxious one, according to NBC News. One Amazon warehouse worker interviewed by NBC said employees are expected to work 12-hour shifts for the week of Prime Day, and their thank-you treat for all that extra hard labor is a snack, “like a granola bar.”

Amazon has met some recent demands for worker equity, but over 200 striking employees at Amazon’s warehouse in Shakopee, Minnesota, feel it has failed in many ways. In December, an employee protest at the same warehouse brought management to the table to discuss setting up a prayer space for Muslim employees and changes related to safety and equity. At the time of that strike, according to Wired, employees were expected to process 600 packages an hour.

Over half a year later, Amazon has failed to fulfill enough of the promises made then that the workers at the Shakopee warehouse are striking again. By stopping work on such a busy day, the workers hope that their labor will be sorely missed this time.

Outside the enormous Amazon fulfillment center, striking employees and allies gathered to share their concerns and listen to each other. Throughout the afternoon demonstration, and amid rainy forecasts, folks driving by honked in support. Workers young and old spoke to the gathered crowd about the conditions of the warehouse, and the hostility from management.

“I started here at Amazon with 70 other workers. There are five of us left a year and a half later,” said Bradley. “Some of them left because they were injured in the first few weeks.”

One employee, Mohamed Hassan, speaking through an interpreter, said they were expecting more people to join them, but, “There are managers, supervisors, and police that are standing in the gates and the front doors, so they are scared because of that.” The Shakopee Police Department responded to this reporter on Twitter, saying, “While we assisted employees blocked by protestors in and out of the parking lot, any report of officer intimidation or blocking building entrances and exits is false.” 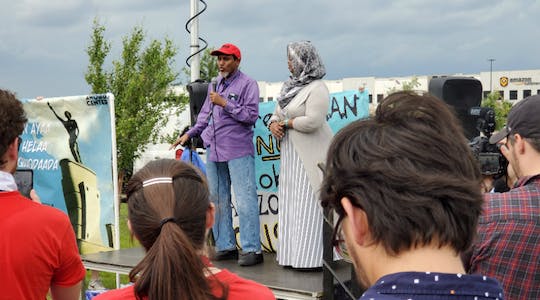 Another employee, Meg Bradley, shared her experience since she started at Amazon. “On Nov. 28, 2017, I started here at Amazon with 70 other workers. There are five of us left a year and a half later,” said Bradley. “Some of them left because they were injured in the first few weeks.”

She said others couldn’t meet quotas, or were eventually too overwhelmed by the stress. Bradley herself was injured in March and said that she had to keep working when her worker’s comp claim was denied. The tendinitis in her foot became a stress fracture, putting her completely out of work, she said. Speaking to the Daily Dot, Bradley summarized the major changes she thinks need to happen at Amazon, “I think they need to reduce productivity rates, and they need to make it a safe workplace.”

“These groups are conjuring misinformation to work in their favor, when in fact we already offer the things they purport to be their cause—industry-leading pay, benefits, and a safe workplace for our employees,” said an Amazon spokesperson to the Daily Dot when asked for comment. “We can only conclude that the people who plan to attend events today are simply not informed.”

Warehouse workers weren’t the only ones protesting, however. Several tech workers from Amazon’s headquarters in Seattle had come as well, demanding that Amazon take responsibility in the fight against climate change. One of those tech workers, Weston Fribley, read letters from other headquarters employees who wanted to voice their support but couldn’t make it, and said they’d gathered over 100 letters in just one day. Speaking to the Daily Dot, Fribley said workers in Seattle had heard of past protest actions from Minnesota Amazon workers and had them in mind as they created the group Amazon Employees for Climate Justice.

“During this past winter’s polar vortex event these warehouses were shut down because it was too cold to operate, and workers went unpaid during that time,” said Fribley. “We were calling for Amazon to make a plan for how they’re going to deal with the disruptions caused by climate change, and also of course to eliminate their dependence on fossil fuels. How workers are treated during extreme weather events that are becoming more and more common is a key part of that.”

Fribley said he thinks the one thing Amazon needs to do is give a voice to all the workers, so they can have input on not just their work life, but how Amazon is changing their communities and the world.

Hassan put the needs of Amazon workers simply in his speech before his fellow employees: “We want Amazon to respect humans. And don’t think that we are robots. We are humans.”