After the Supreme Court's marriage-equality decision, there were even some proposals.

By now, everyone has worked off their Pride Weekend hangovers and washed the glitter out of their clothes. But some of the people who marched, danced, or otherwise celebrated LGBTQ rights are still thinking about their missed connections at various Pride celebrations—and they’re searching for that special someone on Craigslist.

Judging by these listings, there might have been a bit more love in the air than usual this year due to a certain Supreme Court ruling.

A few Pride participants were even moved to propose right then and there to total strangers. 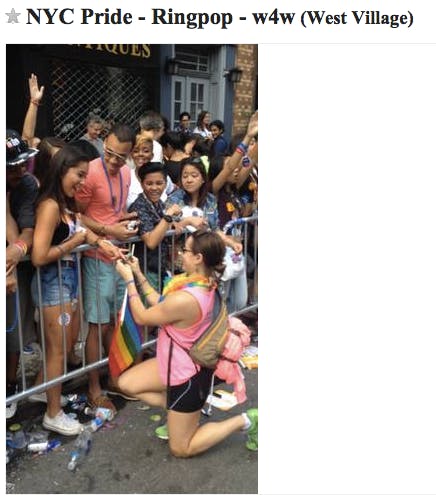 “This is a long shot but….I am kicking myself for not getting your number. You were on the sidelines of the parade and I was marching in it in a pink tank top and black adidas shorts… with Wyndham hotel group. I thought you were smokin’ hot so proposed to you with a ringpop. You said yes, so we should probably keep in touch. ;)”

There were lots of flirtatious interactions that could grow into something more if these star-crossed lovers just checked Craigslist.

Some chose the subjects of their affections from afar, hoping that the cosmos—and the Internet—would eventually bring them together. 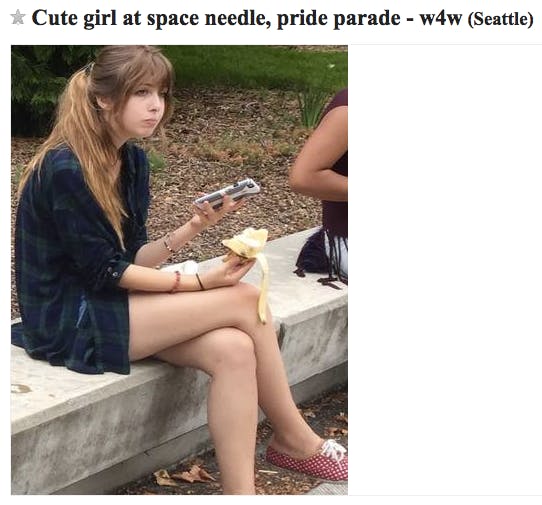 “Hi I was taking a picture with a girl in a red costume with feathers n all kinds of stuff on it, i was the one with the pink shirt. U were sitting behind us eating a banana and I thought u were gorgeous but didn’t talk to u cuz I was a bit drunk :/ anyway, I was lucky n when my friend took the picture it got u too… I really would like to talk to u if its possible n if u want to of course. Thank u n hope I get a msg from u oh yeah and I’m a girl…”

Even straight people got in on the action.

And this guy—well, he’s not so much looking for a particular person as hoping to make a connection with literally anyone who saw him. 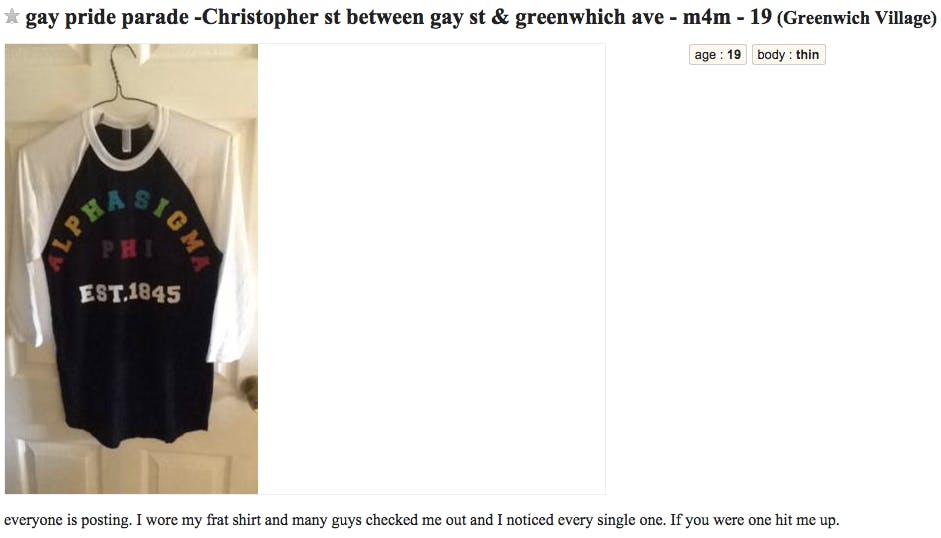 Are you the object of any of these posters’ affections? Did you see that dude in the frat shirt and think he was hot? One of these posts could be about you!

That being said, a word to the woman wondering why the guy in front of the Stonewall Inn wouldn’t take her phone number: There’s probably a very good reason for that.