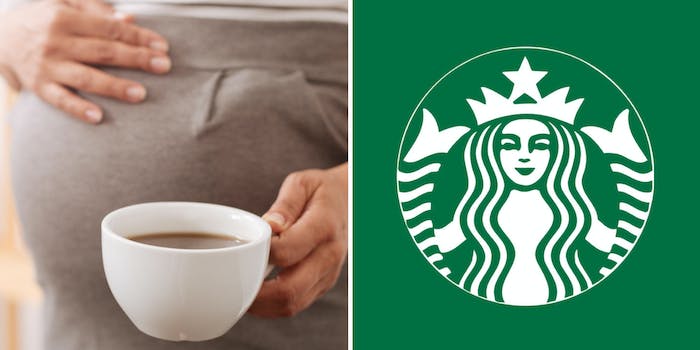 'My most WTF moment was a co-worker TAKING AWAY my carbonated water.'

A woman tweeted about how a Starbucks barista wrongly assumed she didn’t want caffeine in her drink and purposely made her order incorrectly. This sparked a domino effect of people who either are or were pregnant to share the absurd assumptions people made about their pregnancy.

It all started with a tweet thread from Madeline Odent (@oldenoughtosay). “Just now a Starbucks barista intentionally made my drink wrong because they ‘thought I didn’t mean to order a frappe that has coffee it’ and look it’s such a minor thing but people really treat pregnant bodies like public property,” she wrote in the first tweet. In the next two tweets, she says that it doesn’t really matter in the grand scheme of things but “god it is ANNOYING.”

She continued to say that she “went full Karen” and had them remake her drink because she needs caffeine to “keep [her] blood pressure at a functioning level. A fact which is nobody’s business but mine and my midwife’s.” She ends the thread by saying people should mind their own business.

The tweet thread has amassed well over 12,000 likes in the day since it was posted, and many people shared their pregnancy assumption horror stories in solidarity.

One person replied to the thread saying, “Constant caffeine-policing during both pregnancies, of course, but my most WTF moment was a co-worker TAKING AWAY my carbonated water (literally just water! with bubbles!) and sternly handing me a cup of still water with ‘you have to think about the baby now.'”

Someone else responded to the thread with an interaction they had and wrote, “When pregnant with #2 when someone said at my coffee cup ‘I hope that’s decaf!’ I took to saying ‘No but I cut it with vodka so it’s ok.'”

The Daily Dot reached out to Odent via Twitter reply.