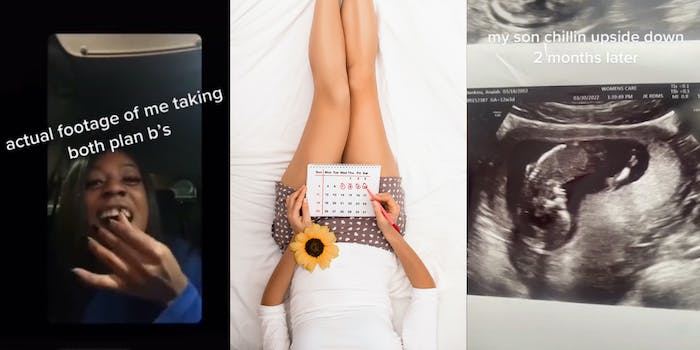 ‘If you’re ovulating, that sh*t don’t work’: Woman says she got pregnant after taking Plan B

'Sad thing is they don’t even teach girls the importance of ovulation.'

Many people still seem to be undereducated when it comes to sex education, and a TikTok drawing attention to one aspect of that is surprising viewers.

@a_anaiah posted a video in April showing “actual footage” of her taking Plan B with the intention of preventing a pregnancy. Cut to two months later, and now she’s got an ultrasound featuring the fetus that was conceived despite the pills.

“I was NOT already pregnant, them plan bs just didn’t work,” she wrote in one comment.

As her video gained traction, another TikToker, @juicecupmain, made a video weighing in.

“I’m starting to feel like y’all don’t even take the time to do y’all research on these Plan B,” she says in a stitch, laughing. “Because if you know, you know if you’re ovulating, that shit don’t work.”

The comments section of both videos make it clear that many people, in fact, don’t know that Plan B isn’t effective if a person is already ovulating.

“The sad thing is they don’t even teach girls the importance of ovulation,” one of the top comments reads.

The so-called “morning after pill” is designed to delay ovulation—that’s how it prevents pregnancy—not simply cancel it out, according to Healthline.

With recent news that the Supreme Court intends to vote to overturn Roe v. Wade and roll back abortion protections in the United States, understanding how various forms of contraceptives work so as to be able to make informed decisions to prevent an unwanted pregnancy is likely to become even more important. Healthline suggests regular birth control or an IUD (copper intrauterine device) rather than relying on Plan B, which, as its name suggests, should probably just be used as backup since it can’t always be effective.

The Daily Dot has reached out to @juicecupmain and @a_anaiah via TikTok comment.