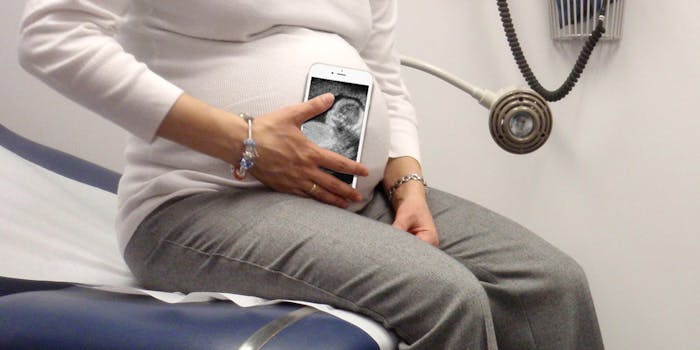 From poppy seed to pineapple: My adventures with a pregnancy-tracking app

Imagining a whole pineapple inside my uterus really puts this pregnancy thing in perspective.

It was late December, 2014. My husband (with my permission) had just knocked me up. There were some obvious next steps: finding a midwife, creating a baby registry, and downloading some sort of pregnancy app to obsessively track the growth of my tiny zygote. Would too much information about my growing fetus help ease my worries over the next nine months?

It was time to find out. I downloaded the Ovia Pregnancy Tracker and Baby Calendar and got started. 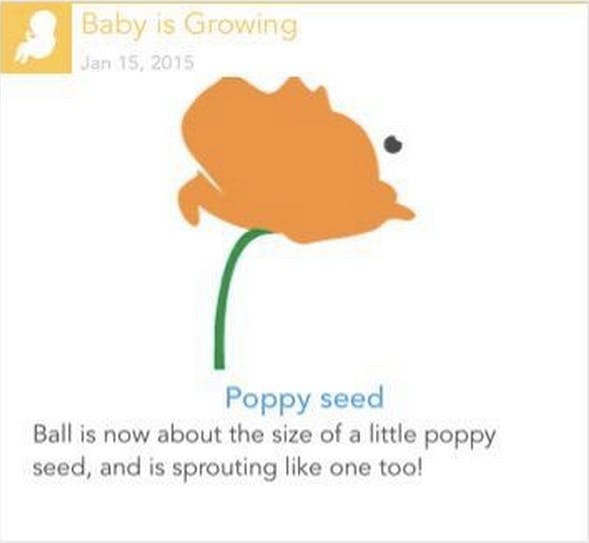 The first month of pregnancy, you’re basically not even pregnant. I felt a little different, and my boobs hurt a little more than usual, but all in all, par for the course. And no wonder! By the end of the month “Ball” (our in-utero baby name) was so tiny, it could fall off a bagel and not be missed. I like that the app was forced to show the poppy next to the poppy plant, because otherwise, it would just be a small speck of black dirt. That’s not how you like to imagine your child. 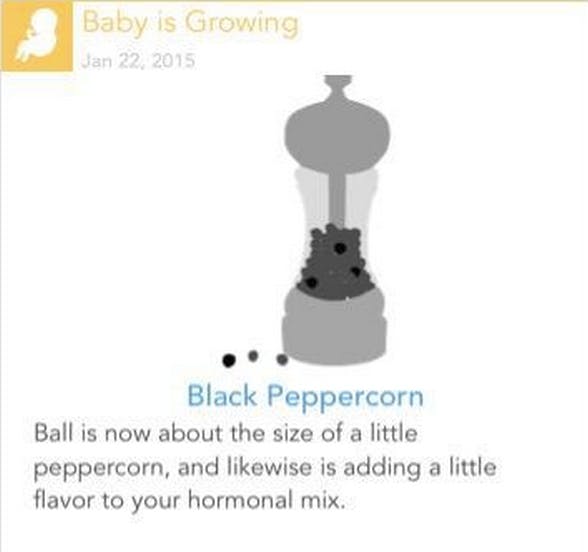 Ain’t that the truth, Ovia Pregnancy. Week five is when my awesome morning sickness kicked in, lasting up to 12 hours a day. All I could eat was potato chips and bread. I grew so green at work that I admitted my pregnancy to my coworkers far ahead of the recommended three-month waiting period just so they wouldn’t think I was spreading the plague or working out a serious drinking problem.

Then around week six—right around the time Ball was the size of a Maine blueberry—“pregnancy brain” kicked in and I was too dumb to be alive. I kept forgetting words like “assembly,” “basil,” and “Sharon.” An old lady sideswiped me as I was parallel parking and I just sat there dumbly, wondering what I should do. (Resolution: nothing)

Then to make matters worse Ovia Pregnancy informed me, “The elevation levels of progesterone needed to support your baby may be contributing to some interesting symptoms and effects, like slowing down you digestive system. “

Constipation and pregnancy go together like potato chips and bread. 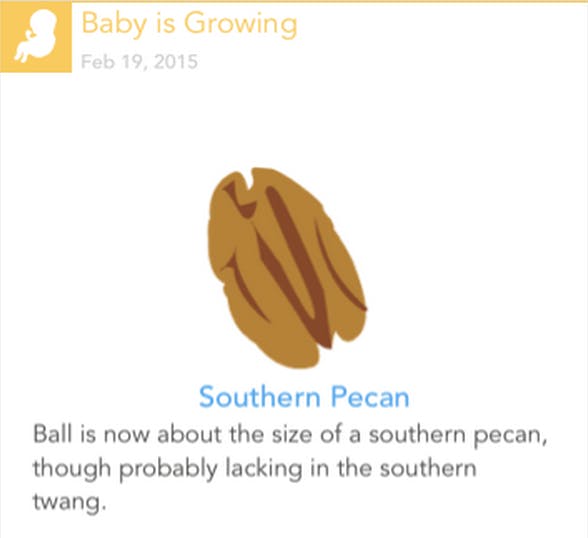 Nine weeks pregnant and the end of the hellish first trimester was still out of sight. I turned the app for comfort in a difficult time. What did Ovia say? “Your baby’s external ear is developing, although it still needs to migrate to the side of its head.”

Migrating ears, huh? See, right there is not information I necessarily wanted to know. I started imagining my baby with a Picasso-esque jumble of features: ears on top of its head or where its eyes are meant to  be. Ugh. Needed focus on something else. Ovia? 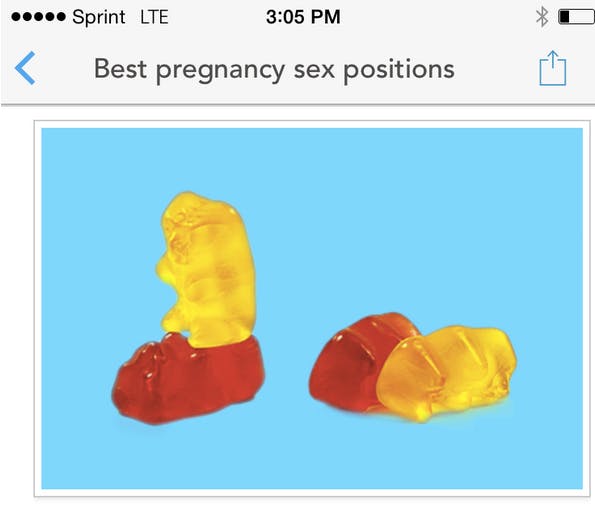 Why the gummy bears, Ovia Pregnancy? I’m a grown-ass woman. I know what sex is. I did some sex to get pregnant and enter into this relationship with you, Ovia. And not only am I really, really not in the mood for love right now, what with all the nausea and constipation, but now you’ve gone and made it weird.

“Increased blood flow may give your vulva a bluish tint.” Counters Ovia.

Now you’ve made it weirder. 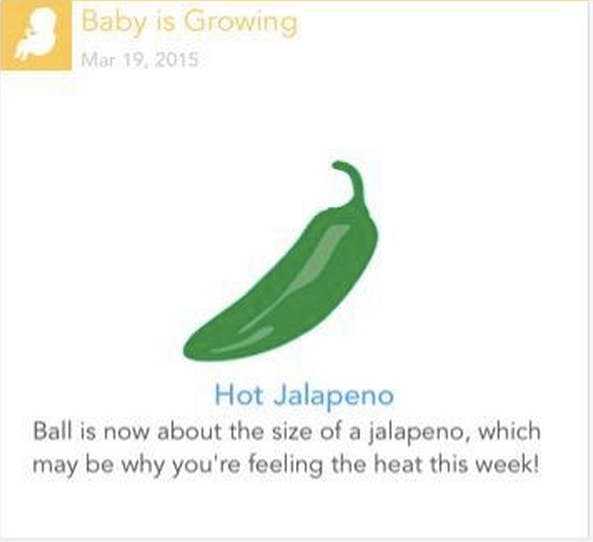 About this time I started to wonder, why fruits and vegetables? They are not the most accurate source of measurement. I mean, how many different sized jalapenos have you seen in your life? Hundreds? Thousands if you make a lot of gazpacho? Millions if you own and operate a jalapeno farm? Then I remembered the app doesn’t actually know how big my particular jalapeno is. This is just a ballpark figure. Ovia and I have become so close these last few weeks I’ve forgotten it cannot actually see inside of me.

All I know is that this week is a big one for ball. Ovia let me know: “Your baby starts to develop its distinguishing facial features and its heart begins to pump more blood. You may begin to gain weight faster…”

And then there’s that. This is prime weigh-gaining time and I am pregnancy weight-gaining master. That’s cute about the facial features, though. Thanks, Ovia Pregnancy. No, I’m not depressed. I’m just…tired.

Ovia: “Your baby can probably hear your heartbeat, and maybe even your voice.”

Shit! S/he can hear my voice already? Gotta keep it positive! “Hey, you! I love being pregnant! I don’t have body issues! Don’t get body issues from me when you are still in utero!” 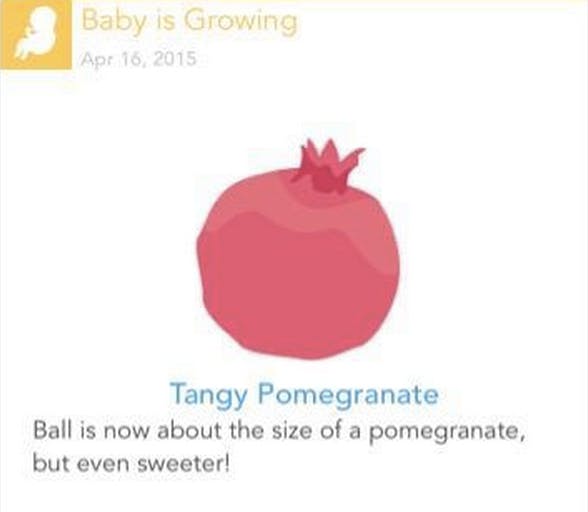 This baby is sweet. I could tell. The little butterfly flutters are too constant to be gas, so they had to be my pomegranate-sized baby dancing around. I love him/her. And nothing can change this good mood that I’m in.

But Ovia tries with this tidbit: “If you are having a girl, even though she’s still about -5 months old, she already has ovaries full of eggs that she will keep her whole life. Your grandkids? Too soon? Too soon.”

I am carrying my own grandkids. I sat for a while and really thought about that. Then I mentally spun down a black hole of awe and horror, facing my own mortality. Thanks, Ovia.

In better news, at Week 19 (sweet potato) we learned we were having a girl. Despite the eggs situation, we are very, very happy.

Also this week? The first time I sneezed and peed on myself a little bit. Ovia recommends Kegels. 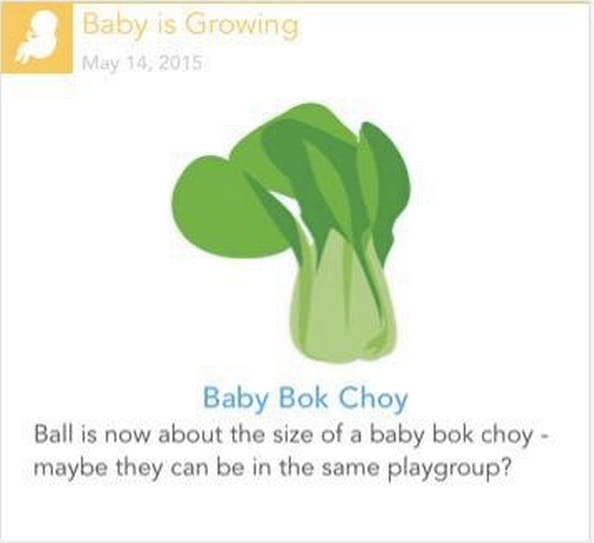 A baby bok choy is no small veggie, and I could really feel Ball moving around. She kicked and rolled constantly, and I loved it. It was like being a fleshy fish bowl. What I didn’t like was the hemorrhoids from Ball weighing me down as I sit all day and type for a living.

And it’s not just Ball weighing me down. I’ve gained so much weight in my butt that my two-year-old pointed to one cheek and said “You’ve got a baby in there?” When I told him no, he cried. 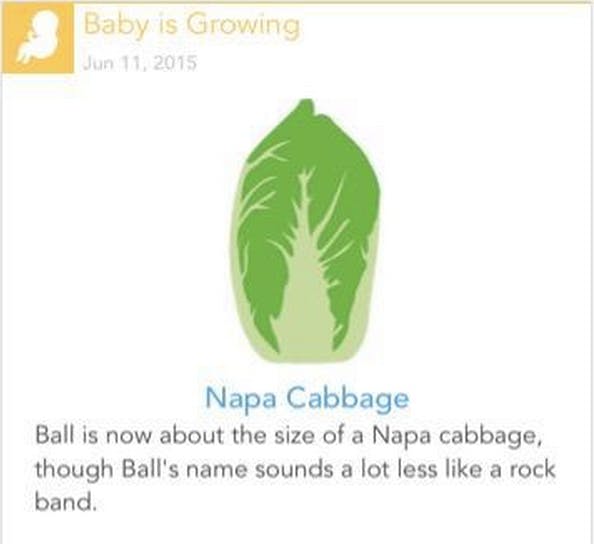 While I didn’t get the rock band reference, I was taken aback about the super large size of the vegetables and fruit this month. Week 26 is a butternut squash. Week 27 is a bunch of bananas. Week 28? 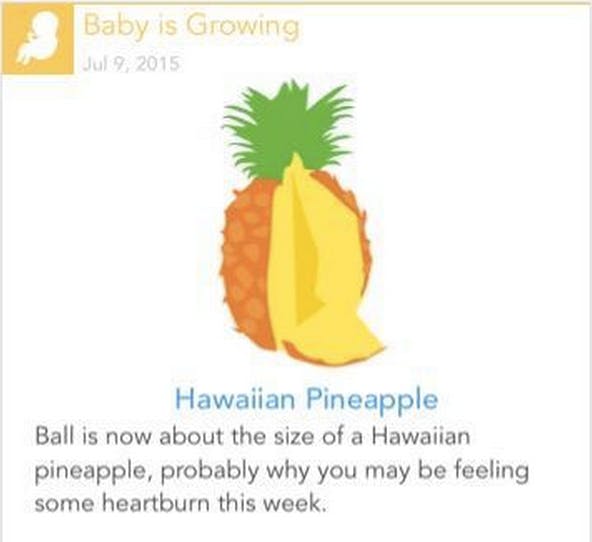 I don’t believe I have something the size of a pineapple inside of me. I looked in the mirror and face the evidence, but I still had a hard time comprehending it. Just this week I finally realized that I would, someday soon, have to push my little girl out my vagina. And she will be BIGGER than a pineapple. 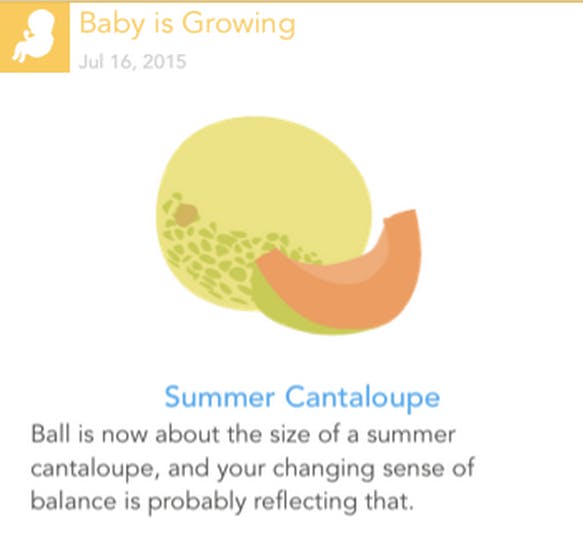 Pros of a giant baby belly: built in cereal bowl shelf. Cons: she can and will kick the cereal bowl off of you. 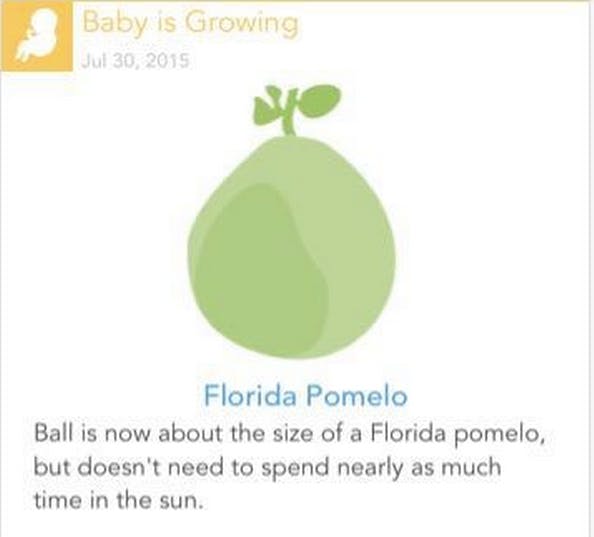 After 32 weeks I got sick of vegetables and fruits. I didn’t have any idea what a Florida pomelo was and I was craving some real information. I decide to switch themes inside Ovia to “weird-but-cute animals.” 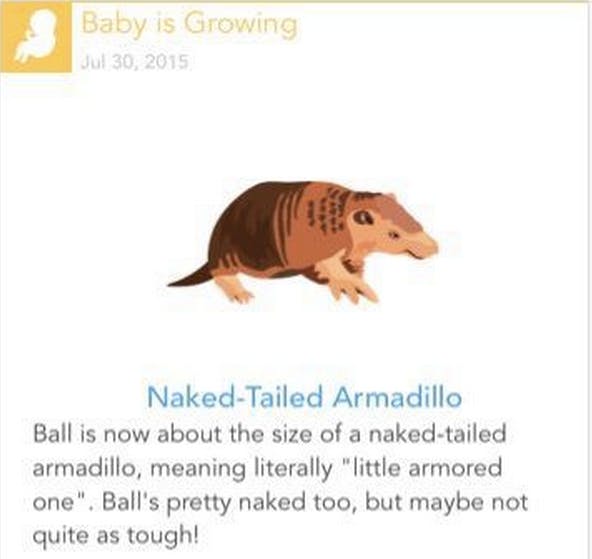 That didn’t help me at all. But armadillo-online.org said those guys are about 12 – 19 inches long. Ovia Pregnancy, not only am I having to do outside research here, but I’m left with more questions than before. There’s a big damn difference between 12 and 19 inches! I switched back to vegetables. 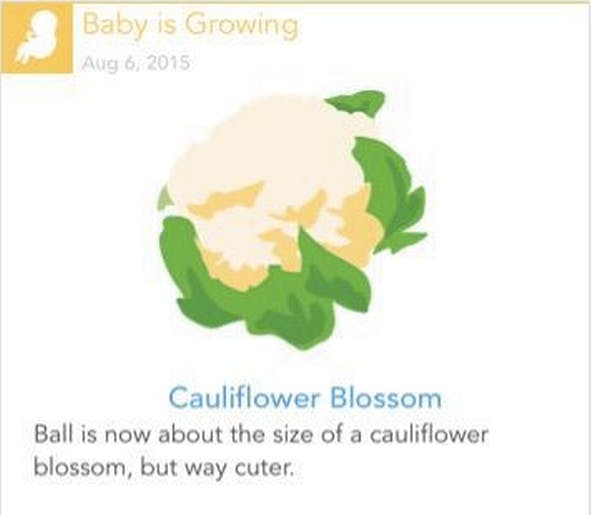 Ovia Pregnancy, don’t patronize me. You have no idea how cute or not cute Ball is. You are just saying nice things and I don’t appreciate it. Just like I didn’t appreciate that old biddie who told me I “looked like I was about to pop,” when in fact I have like seven weeks left.

Ovia counters with: “Your baby has eyebrows to raise and furrow!”

Hey Ball, I see those raised eyebrows. Don’t judge me for telling off an old lady. She was being rude! OK, she wasn’t try to be rude and I did yell at her in front of a lot of her friends. But it was 90 degrees outside, Ball! You try being pregnant in 90 degrees and then you think about where you’re going to put those eyebrows.

Today, at 170 pounds, I am 33 weeks and three days pregnant. Babies are considered full term at 38 weeks so at best I have five weeks to go (savoy cabbage through spaghetti squash.) At worst we are looking at full fresh watermelon at 42 weeks. If nothing else, Ovia’s deluge of fun facts and crudité will help the remaining weeks go by a little faster.

I’m betting that, somehow, Ovia and I will make it through to the end…together.