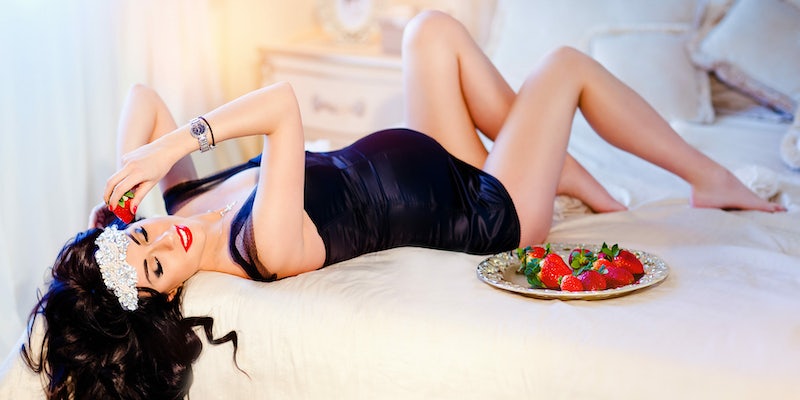 From fertility goddess to 'fat cow,' the genre shows how conflicted we are about pregnancy.

Sadie Holmes is more than 39 weeks pregnant and going into labor. She is sitting naked on the bed in the RV she calls home waiting for her next contraction to hit. While she waits, the 27-year-old brunette is filming a video for a fan. She wraps a measuring tape around her breasts, belly, and butt, while reading out measurements — 37 inches, 38 inches, 40 inches. “Mmm, look at that belly, and look at how swollen I am now,” she says, touching her pubic bone.

Then, a few seconds later, a contraction hits. “Ahhh, owww,” she says intensely, flapping her hands and sucking in air. She ends the video holding her belly and flirtatiously telling the camera, “I’m off to the doctor in the next few hours.”

Last summer, 31-year-old Scarlett Lacy had been working as a cam performer when she found out that she was unexpectedly pregnant. “I was like, ‘Oh my god, there’s no way I’m going to be able to pay my bills,” she said. But then she started digging around the two sites she used, Clips4Sale and ManyVids, and found that pregnant performers were thriving. “It actually gave me hope,” she said. So, she started producing pregnancy clips that ran the gamut from what she calls “goddess fetish,” where it’s all about her being a “beautiful fertile woman” with an eroticized big round belly, to pretending to blackmail the viewer after tricking him into getting her pregnant to mocking a fan for not being able to get her pregnant. “It was insane and awesome — they did really well,” she said.

It seems fans don’t want any one thing from pregnancy porn. Holmes says many are titillated by the physical expansion that comes with pregnancy and enjoy tracking these details with OBGYN-like precision — one of Holmes’ fans paid for a series of updates throughout her pregnancy in which she would measure her expanding body parts and weigh herself. Some enjoy watching her pretend to be physically out of control while pregnant — say, gorging on junk food or groaning about the size of her belly. Another popular sub-genre is pregnancy cuckolding, where a man is belittled for failing to impregnate a pregnant woman. Sometimes there are shades of financial domination, where a pregnant woman orders a man that he must pay her child support, even though he didn’t father her child.

Kelly Oliver, a philosophy professor at Vanderbilt University and author of, “Knock Me Up, Knock Me Down: Images of Pregnancy in Hollywood Films,” says attitudes around the pregnant body have done a complete 180, at least on the surface. In the 40s and 50s, it was something to be hidden. “Women were supposed to cover themselves up, stay at home, and were ashamed of being pregnant — I guess because it signaled that they’d had sex,” she says. In 1952, an episode of “I Love Lucy” dealt with the star’s pregnancy without once uttering the word “pregnant,” which was deemed too indecent to air.

By 1991 Demi Moore was posing fully nude on the cover of Vanity Fair while seven months pregnant — but the image was seen as so controversial it was sold wrapped in paper with only her eyes showing. Several decades later it feels de rigueur for pregnant celebrities to pose nude, whether it’s Jessica Simpson on the cover of Elle or Kim Kardashian in a naked selfie.

But it’s not so simple as to say that the pregnant body has been embraced. Tabloids celebrate Beyonce’s fertility goddess photo shoot or Serena Williams’ first-trimester Australian Open win at the same time that they critically obsess about celebrities’ excessive pregnancy weight gain or struggles to get back their pre-baby bodies. Mainstream film and television occasionally offer up soft-focus pregnant sex scenes, but maternity is often shown as comical and awkward, particularly when it comes to sex. “In a lot of these films the pregnant body is the butt of the joke, but it’s also highly eroticized, so you see a lot of it,” says Oliver. “It’s seen as sexy and attractive, but also kind of abject and yucky.” Then there are horror films, where women are pregnant with terrifying alien spawn — a not so subtle representation of reproductive angst, says Oliver.