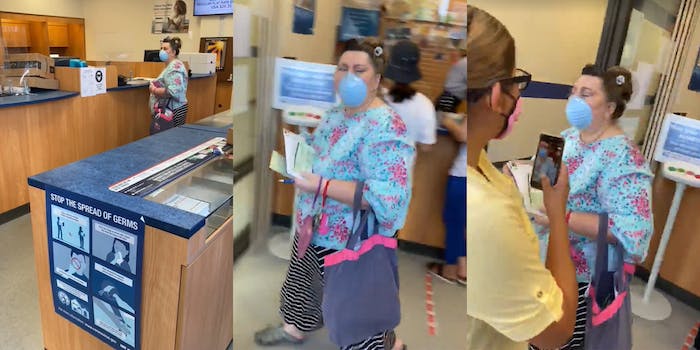 Karen stormed out in a huff after customers called the police.

An incensed white woman proudly carried the flag for Karens everywhere when she was recently caught on camera yelling racist slurs at an Asian post office employee in Los Altos, California.

In the clip, “Post Office Karen” can be heard yelling at the female employee, “Can’t you just do your job? It’s simple!” and later, “I’ve been in this country 38 years, I think I should know what I’m doing.”

Other customers begin to protest Karen’s behavior, and one woman says she’s going to call the police. Karen then mutters “chink” at the employee.

“Not appropriate. Absolutely not,” one customer says, as Brumfield chimes in with, “Whoa, whoa, that is not acceptable.” (Brumfield then repeats the slur, seemingly as clarification for a nearby customer.)

At that point, a woman can be heard calling the police, describing Karen as “screaming loudly” and “yelling racist things.”

After being denounced by multiple customers, Karen finally storms out of the post office, but not before taking some parting shots. She calls the Asian employee a “bitch” and a “fucking chink,” glaring straight at Brumfield’s camera before walking out the door in a huff.

In a Zoom call with ABC7, Brumfield explained why he posted the video of Post Office Karen.

“We are all humans and we should respect each other as such” he continued. “Because someone is different or has different melanin doesn’t mean we have to disregard the humanity of that particular person.”

The United States Postal Service is reportedly investigating the incident.