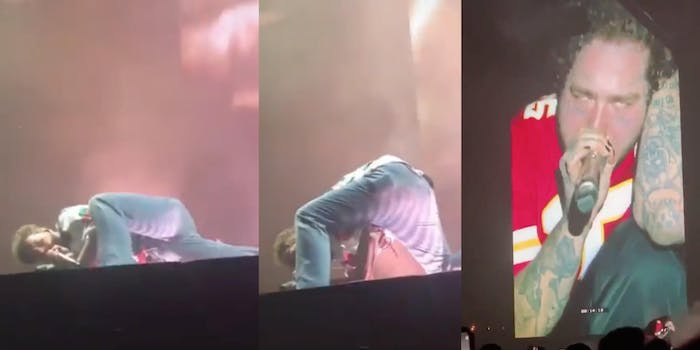 In one video, the artist can be seen flopping on the ground.

Post Malone responded to allegations of drug use on Friday after fans began circulating videos of what they claimed was bizarre behavior from the artist.

During a stop in Memphis, Tennessee, as part of his Runaway Tour, the 24-year-old “Rockstar” rapper addressed the controversy by reassuring his supporters that he was in good health.

“I’m not on drugs! I feel the best I’ve ever fucking felt in my life. And that’s why I can bust my ass for these shows and fucking fall on the floor and do all that fun shit,” the singer said. “But for anyone that’s concerned here, I appreciate the love and the support, but I feel fucking fantastic and I’m not doing drugs.”

Numerous videos of the rapper circulated online just days prior, in which the artist was seen rolling his eyes in the back of his head and falling on the floor.

While Post is known to indulge in Bud Light beer, fans felt the “Better Now” singer’s actions were indicative of something else. Just one tweet from a concerned supporter on Friday received more than 60,000 retweets.

“You can’t sit there and tell me that this is normal behaviour from Post, it’s not and the man needs help before something bad happens to him,” Twitter user @OliviaTruesdal1 said on Friday. “Whether it’s alcohol or drugs, he’s not using them for fun anymore, he’s abusing them. It’s too much now, people are worried.”

Despite Post’s denial of drug abuse, some fans still alleged that the songwriter was in danger.

“Maybe it’s not drugs or even alcohol, it could just be exhaustion,” user @MarkRemains12 said. “Either way, he needs to take a break and take care of himself.”

Although many remained worried, other fans pushed back against attempts to diagnose the rapper based on short video clips.

“People need to stop assuming they know the full story on things with a >60 second video on the internet without background or context,” user @thetylermorale said.

Fans in the hip-hop community have become increasingly concerned over the well-being of artists since the passing of numerous high-profile rappers, including Lil Peep, Juice WRLD, and Mac Miller.