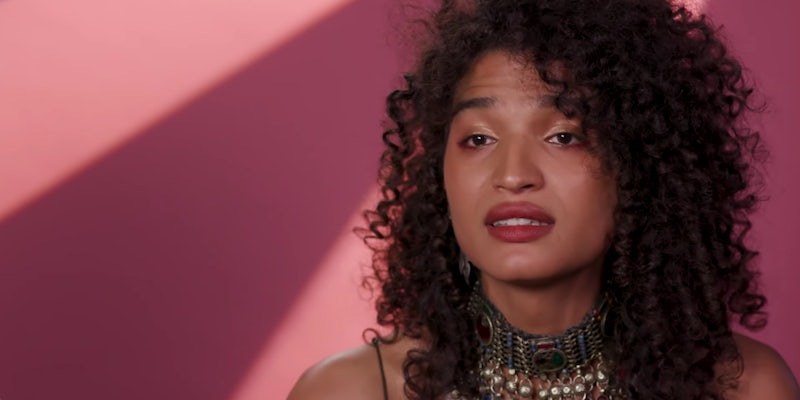 Pose’s Indya Moore isn’t backing down when it comes to trans people’s bodies.

Moore, a trans actress of color who plays transgender sex worker Angel Evangelista on Pose, has long used her platform on social media to speak openly about trans lives. Last weekend, she went viral over a series of tweets, which started with a simple statement: “Trans women are biological women.”

Throughout the day she expanded on the point, explaining that not all women have XX chromosomes, that gender and sex aren’t one and the same, and that a woman’s gender shouldn’t be defined based on whether she can become pregnant or not. Each of those stereotypes harm trans and cis women alike, forcing them to confine to narrow boxes that simply do not reflect how gender is experienced in the world.

“The biology of trans women may be different than that of a cis woman, but that doesn’t make trans women less biological, less woman, or less biological women,” Moore wrote. “Trans women aren’t synthetic or parody women. Ya’ll support trans women up until it gets real.” (The Daily Dot reached out to Moore for comment and is awaiting a response.)

Moore took the often-heard rallying cry “trans women are women” one step further: She argued that if trans women are biological women, by definition, a trans woman’s penis is “a biologically female penis.” That’s a radical point missing in mainstream discussions on trans bodies, as trans women are often made to feel as if they should be ashamed of their genitals if they don’t have a vagina.

When reached for comment, an Out spokesperson stressed the piece “will either be revised or entirely recreated to not assume that all women have vaginas.”

“This was an error at the time this piece was assigned and promoted on social media, which predates Out’s new editorial team’s arrival,” the Out spokesperson told the Daily Dot. “In short, Out’s sex content moving forward will and should talk about vaginal and clitoral stimulation without assuming a person’s gender identity. It’s so important that Out—and all outlets, really—create educational sex content that’s inclusive of various bodies and identities.”

“We regret the error,” the spokesperson continued, “and while we work on the next steps for this particular piece, we, of course, look forward to creating more (and more inclusive!) content about sexual health and pleasure.”

With Moore’s viral tweets—her original Saturday post sparked over 4,000 retweets and 20,000 likes—she is forcing cisgender Twitter users to address their hidden biases against trans bodies. By stressing trans women are biological women, Moore is arguing that trans women exist as women innately and deserve to be treated as women regardless of whether they adhere to cisgender conceptions of womanhood.

In other words, it’s not enough to simply stand behind trans people and respect their pronouns. Cis people must embrace trans people in all of their physical configurations, from non-op trans women with penises to trans men that refuse testosterone and top surgery.

Editor’s note: This piece has been updated to include comment from Out.