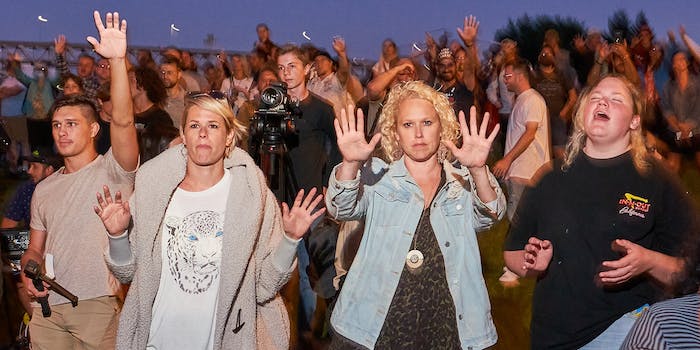 Hundreds of Portland, Oregon, residents put their faith in God and their Herculean immune systems when they attended a mask-free, outdoor worship event on Saturday, KGW8 reports.

The Portlanders congregated at the city’s waterfront to see Sean Feucht, a worship leader and congressional also-ran affiliated with the Bethel megachurch stationed in Redding, California. The event, named “Riots to Revival,” was intended to serve as a balm for a city plagued by political strife and police brutality over the past month.

Feucht has been hosting similar events around the United States over the last several months. In June, he earned criticism for leading a “Hope Rally” in Minneapolis, where George Floyd was killed by police officer Derek Chauvin on May 25. Feucht—who previously called the Black Lives Matter movement a “fraud”—reportedly set up shop near the memorial on the street corner where Floyd was killed and drowned out local DJs with his music.

Bethel Church is no stranger to controversy either. While the megachurch is known globally for producing ultra-slick worship tunes on its Bethel Music label, its theology has been criticized for being dubious at best and downright heretical at worst. In December, Bethel Church singer Kalley Heiligenthal and her husband, Andrew, raised eyebrows when they tried to crowdfund $100,000 to resurrect their two-year-old daughter, Olive Alayne, who died.

The hundreds of attendees at Feucht’s Saturday event, many of whom came from out-of-town, were openly defying state orders that cap indoor and outdoor faith gatherings at 50 people and require physical distancing. When questioned by local reporters about their decision, they showed little regard for the coronavirus or the need to heed state legislature.

“We’re not big mask people so it doesn’t bother us,” one attendee told KGW8.