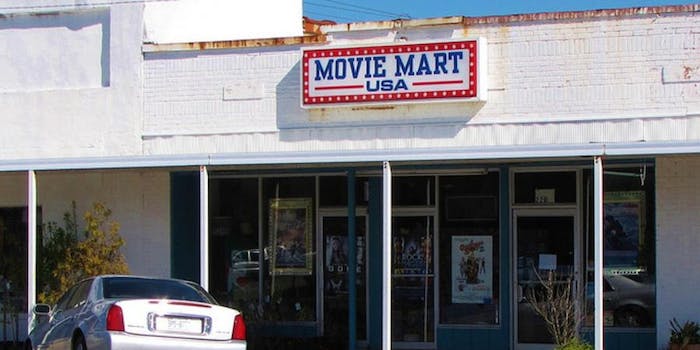 I sold VHSes for lonely old men to jerk off to. Here's what I learned.

At the height of Blockbuster’s dark reign, every town had two video rental stores: the Blockbuster you went to for actual movies, and the last pre-Blockbuster shop still standing, which survived by offering the one thing Blockbuster didn’t: a back room full of videos that were less than family-friendly. (Blockbuster had a hard-and-fast policy not to offer smutty movies.)

I hadn’t realized this when, at the age of 18, I walked into my local small video store and asked if they were hiring. I had assumed this small, crappy store with the worst selection you could imagine—no Star Wars, no Godfather, but Slumber Party Massacre III and a complete set of Red Shoe Diaries—attracted customers only because it was closer to some people’s houses than Blockbuster was.

Unlike the categorized and searchable websites of today, most of our selection was in no particular order. The discerning fetishist had to spend time scanning the shelves, tracking down just the right video and hoping to avoid eye contact with his fellow patrons. (Or her fellow patrons, but only on rare occasions; our clientele skewed male and old.)

We also had a small “classics” section: Debbie Does Dallas, Behind The Green Door, Deep Throat, even Caligula. I think the owner thought this made us classy.

But the one-timers were often more interesting than the regulars. One day, when I was alone in the store, a nervous-looking man came in, cased the joint with shifty eyes, and quietly, suspiciously asked me: “Is the boss in”?” I was 100 percent convinced he was about to rob the store. I lied and said the boss was in the back and had asked not to be disturbed.

I was thrilled to be helping a man jerk off to other men, instead of having a gun pulled on me.

My town was not big, so I saw our regulars whenever I walked down the street. From lawyers to cable repair guys, they’d make nervous eye contact with me, greeting me with the awkward, nervous pleasantries of someone in the witness protection program who’d just seen an old crime associate.

I’d always think: “I know what that guy jerks off to. And he knows I know. And we’re both thinking about it, and we both desperately want this moment to end.”

I lasted about seven months at the video store, although my greatest legacy—the word “CLASSIC” in my handwriting, written in Sharpie on small white labels—survived for years. I left in mid-1998, as the store was beginning its slow and belated transition to DVD. Napster was a year away, and media had yet to break free from its bulky physical containers.

All in all, I think everyone is happier this way. I don’t think anyone liked running their porn by me any more than I liked having it run by me. My interactions with our regulars felt like a necessary evil, like I was in on a secret they would’ve rather not had to tell me about. Sometimes it was literally a secret, like in the case of the nervous gay guy. He had to come out to at least one person to get access to his fap material, while his modern-day counterparts are free to question and explore their sexualities in private.