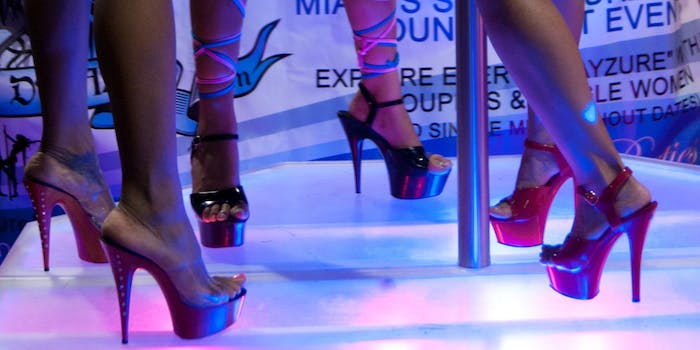 There’s nothing quite like drinking cold-pressed juice while simultaneously getting a lapdance from a busty lady. Shane Harrington gets that.

Harrington told KETV, “We’re going to be an alcohol-free strip club. A drug-free strip club. If girls want to drink or do drugs, we’re not the right strip club for you.” The decision to open a nudie juice bar comes two years after Harrington sold another club in Nebraska, after years of fighting for a liquor license.

This isn’t the first time a starry-eyed entrepreneur has tried to open a juice-themed gentlemen’s club. Back in 2005, South Dakota businessman Bob Rieger opened Racehorses Gentlemen’s Club, which also featured a juice bar. Locals were outraged by the club, leading to the formation of the ridiculously named Citizens Against Nude Juicebars and Pornography.

The naked juice bar entrepreneur hasn’t bought land for the strip club yet, but he’s eyeing Nebraska’s Hall County for the first franchise. In the future, he plans to open other NSFW Jamba Juices in Lincoln and Omaha.

Of course, not everyone loves juice and boobies equally, and there’s already been some opposition to Harrington’s plan. Church groups flocked to a county planning and zoning board meeting to protest Harrington’s proposal.

But Harrington is steadfast in his quest to see his dreams of topless juice quaffing come to fruition. He says if his business is legal, he can’t be stopped. Here’s to you, Shane Harrington. Keep fighting for ladies’ right to get naked while drinking kale-pomegranate smoothies.