Lisa Ann vs. Nikki Benz and Bonnie Rotten vs. Christy Mack are our generation's Ali vs. Frazier. Or something.

This was an awesome year for celebrity beefs, from Iggy vs. Azealia to Taylor vs. Katy to Marlon Wayans vs. Lord Jamar.

It all started when adult performer Nikki Benz, who’s most famous for announcing her Toronto mayoral run earlier this year, tweeted photos of her birthday celebration in Dubai. She also posted a video on her Instagram of a camel race, with the caption “When you in Dubai you bet on camels.”

This is the subtweet that started it all. Plus her DMs and texts to me cc: @thereallisaann pic.twitter.com/3BcKnJGxUw

Obviously, the tweets were a not-so-subtle implication that Benz was in Dubai not for her birthday but as an escort. (While it’s fairly common for adult performers to escort on the side, it’s an extremely controversial practice in the industry, with some arguing that performers who escort without using protection put other performers at risk for contracting STIs. Lisa Ann has gone on record speaking out against performers escorting.)

Enraged, Benz fought back, calling Lisa Ann a hypocrite, a “bully ass hoe,” and attacked her reputation in the adult industry. It escalated quickly, with Benz ultimately accusing Lisa Ann of engaging in various unsavory activities and challenging her to a boxing match :

You're claiming you're a role model? What about all them pills you pop? And the cocaine use? Shit you're prob high right now bitch!!

@thereallisaann you are the least liked person in the adult industry. You are mean to everyone. You're a bully but u can't Fuck w me!

Oh hey @thereallisaann they know too!! 😘😘 I got 5k for u. pic.twitter.com/7lKnSsls46

You sure are brave over the Internet. Let's see you in a boxing ring @thereallisaann

Hey @thereallisaann let me beat your ass in a boxing match and I'll donate the proceeds to a charity. U fucking bully ass hoe!!!

People should spend less time on jealousy and negativity and more time on positivity and looking in the mirror.

@thereallisaann don´t sink down to her level. Just ignore the bullshit

@thereallisaann You dont have too explain enithing.We belive in you.

Benz concluded by telling Lisa Ann she was “wiping her ass with her face.”

It went on like this for a few hours, with Lisa Ann retaliating by accusing Benz of, among other things living in the U.S. illegally, then declaring all-out war: 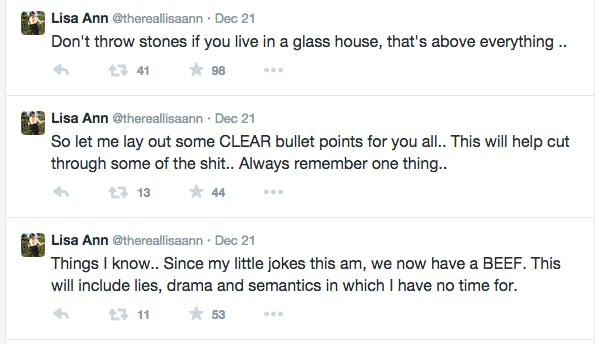 She tweeted the following this morning: 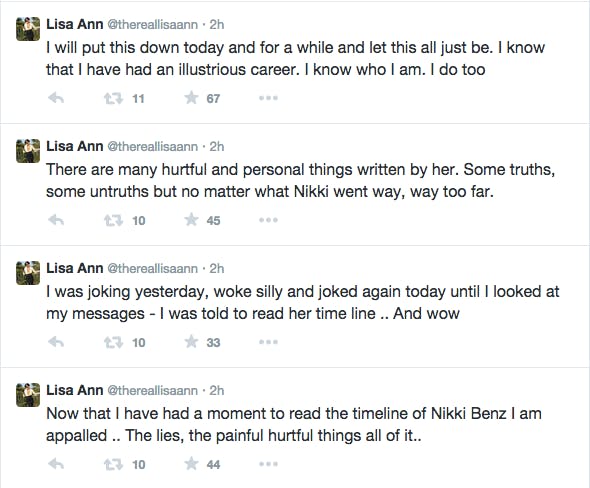 Over on the alt-porn end of the spectrum, adult performer Bonnie Rotten lashed out at former adult performer Christy Mack, who was recently seriously injured in a brutal beating by her ex-boyfriend, the MMA fighter Jon “War Machine” Koppenhaver:

This isn’t the first time Rotten has gone after Mack on social media after her attack, in which Mack suffered 18 broken bones, a ruptured liver, and missing teeth. There appears to be some longstanding beef between the two, but Mack took the high road (kinda):

@thebonnierotten I'm sorry I'm helping others and you're just shitting on yourself and losing money trying to produce scenes.

@thebonnierotten @ScottBrindisi I buy followers? Didn't Instagram just do a cleanse? And don't I still have over 1.1 MILLION followers?

@thebonnierotten also, the royalties that I receive from products are more than enough to live on. But you wouldn't know what that's like.

.@thebonnierotten I quit over a ago, and you're still trying to compete with me. That doesn't make you better, that makes you an idiot. 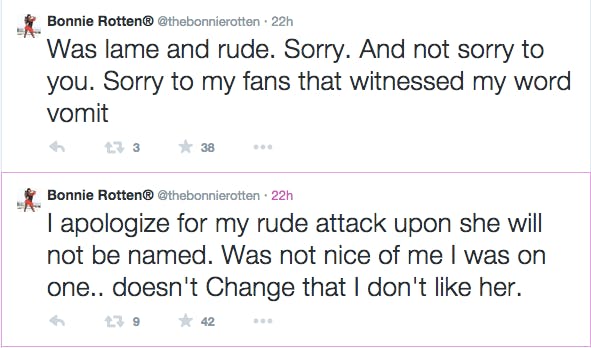