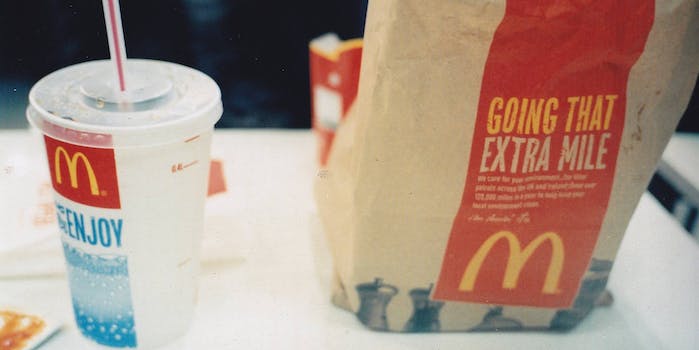 Mickey D's is the latest chain to put filters on its Wi-Fi.

If you want to participate in your Thursday ritual of eating a 10-piece chicken nuggets at your local McDonald’s while watching “Best Head EVER,” you’ll have to start using your data plan.

“Parents can have peace of mind that, when they or their children go to McDonald’s, they will have a safer and more friendly Wi-Fi experience,” Enough is Enough President Donna Rice Hughes said in a press release. McDonald’s had already implemented these filters in the U.K., and began filtering the Wi-Fi at its corporate-owned stores earlier this year. It joins other popular chains like Panera Bread, Subway, and Chick-Fil-A in creating a porn-free environment.

And for those who’d rather enjoy their adult content with a side of mozzarella sticks, a representative from TurnKey Technologies, which provides Denny’s with all of its Wi-Fi services, also informed the Daily Dot it does not provide filters on the chain’s service. Truly, a Grand Slam.