The writer and former adult performer spoke at Havard Law School this week.

If we had to elect an ambassador of sorts for the adult industry, the pool of candidates would probably include the usual suspects: the Stoyas, the Sashas, and the Jameses, performers with a high level of name recognition and mainstream cred. I, however, would nominate a slightly lesser-known, yet nonetheless familiar candidate for this (admittedly ludicrous) position: Aurora Snow.

So tell me a little bit about your plan for speaking at Harvard.

My subject is “Sex, Drugs, and Rolling Dice: On The Regulation of Vice.” I’m there as a guest speaker, basically to humanize the subject of pornography and talk about how the testing is implemented, and what working conditions are like. The students are learning about laws that regulate the adult entertainment industry, and I’m there to put a face on it and talk about how they affect performers personally.

So you’ll be talking about the condom mandate [Measure B, the 2012 law requiring adult performers to wear condoms]? 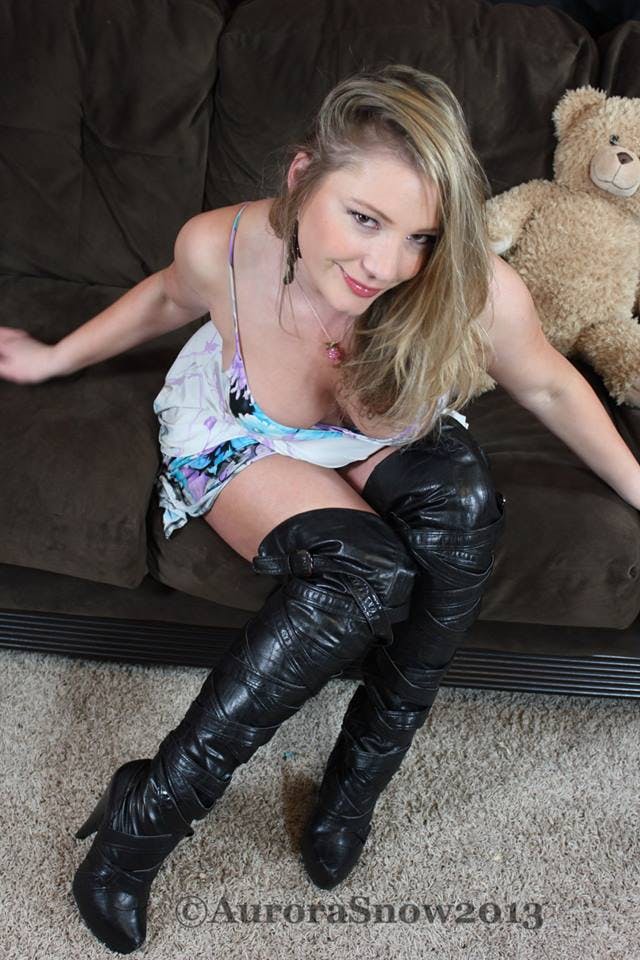 I’ll be talking about Measure B and how that impacted performers. When I wrote about it in the Daily Beast, I know a lot of performers saw me kind of as the enemy when I came out in favor of Measure B, because a lot of the feminist and Christian groups were also in favor of Measure B. And I was not an enemy of the industry by any means. I came out for that because I thought it was such a favorable way to institute workplace safety in a way that we hadn’t been able to institute before, and more than that it really legitimized porn. To implement workplace safety helps others recognize the business as a real, legitimate business.

What was the response like in the adult community after you came out in favor of the condom mandate?

Publicly, it was a pretty divisive response. Publicly, there were a lot of people saying, “I understand what Aurora is saying, however, I disagree strongly.” And privately, in DMs on Twitter and in emails, I had several performers email me saying, “Thank you so much for writing that. I wanted to say something like that, but I feel like I can’t speak up or I’m gonna lose work.” And I understand that. It’s something that, had I been an active performer at the time, I would’ve had reservations about writing it, because I would’ve been afraid of losing work. And I probably would have.

There were four known cases of HIV infection in the industry in 2013, which led to three separate moratoriums on shooting. In light of that, do you think the conversation on Measure B and regulation has changed in the industry at all? Do you think that most people are largely still in opposition to it, or that more people are starting to think, “Hey, this might be a good idea?”

I think the conversation has definitely changed. When I came out in favor of it in the piece, I was one of maybe a few. And in part because of the moratoriums and the HIV cases that have sprung up, more and more people have crossed the line and said, “Hey, Measure B is maybe a good idea.” And I think that’s a good thing. They’re starting to understand what that kind of legislation can do.

The rise of adult agencies is a relatively new development in the industry. What role do they play in the conversation over condom use? How prominent are they in the discussion?

Agents wield a lot of power. Girls coming in the business, girls in the business, look to the agents for advice on what they should and shouldn’t do to prolong their careers. I don’t know how agents felt about Measure B. I’m sure most of them didn’t like it, but maybe some of them didn’t necessarily care, as long as work was still happening.

In 2000, when I started, the business only had a few agents. You didn’t have as many as you have now. And when I started, the business was a bit word-of-mouth and the Internet was just becoming huge at the time, though not as big as it is now. Back then, agents had to advertise in the classifieds and didn’t really have a mainstream approach to getting girls in the industry. Now, with the Internet, they can have their websites and put ads out there. So girls who really wanna get in can look at the websites and the girls they’re representing, and if they happen to be fans of those people, they’re more likely to approach that agent. I feel like there’s a huge influx of talent and so many more people that flock to the industry now. Everyone’s hoping to be the next Jenna. You didn’t have that when I started.

Yeah, you came in at a time when the Internet was sort of just starting to really explode. What’s the one major way that the Internet has changed the adult industry since you first started?

When I started, there were hundreds of companies, and performers could work as often as they wanted to. There was tons of work. Now, there aren’t as much companies, in part because of the Internet. It’s cheaper to produce, cheaper to distribute. You don’t need to have a big company. You can do it all pretty much from your home and run a website. You don’t need to have the overhead of a company. Unfortunately, it reduces the work and reduces the type of rates performers can demand or get paid. But more than that, it’s made it a little personalized. Now, a performer doesn’t necessarily have to do much scene work: You can do a few scenes, create a name, then take that name home and offer webcam shows, offer personalized custom videos to your fans, communicate directly to your fans on social media. And you couldn’t do any of that before. It’s definitely become more personalized.

Do you think it’s necessarily a positive thing that social media and cam shows and the like have bridged this gap between fans and performers?

Well, by bridging the gap between fans and performers, it’s definitely taken away some of the fantasy. The performers are no longer girls on pedestals. They are now girls you can actually talk to and touch in some way. That’s great for fans. It can be a really good thing for a girl in the business. She can build her fan base without having to do 80 or 100 scenes, just by interacting with them and maybe doing a webcam here and there so they can see her face and get to have that one-on-one interaction. However, I think it really takes away from the building of a porn star. With this kind of social media, I don’t think you can really have another person like Jenna [Jameson]. The way she blew up, I don’t know if that’s achievable anymore.

I think part of the attraction is that she was this unattainable fantasy. Girls are no longer an unattainable fantasy. Once your fans get to know you, they start to—I’ve had fans get to know me on social media, and they’ve said, “Hey, I’ve gotten to know you, I really like you, and now I have a hard time watching your movies.” And so now they don’t necessarily wanna be members of my website, they don’t wanna watch me have sex anymore. But they do want to have conversations with me on social media. They become a friend, as opposed to a fantasy they wanto to buy into.

Would you personally have entered the industry as is now, in 2014?

I don’t know. I was a little naive when I entered the industry in 2000. I felt like I’d probably work in it for a year and maybe not be well known, and then 10 years from then I could completely deny it and no one would ever know I did it in the first place. I definitiely couldn’t have that belief in 2014, no matter how naive I was. And I think in 2014, with all the social media, I would’ve had to do some heavy considering, trying to figure out whether I wanted my face or my body blasted all over Facebook and Twitter. And now it’s not just adult performers blasting nude images all over the place, you also have kids doing it: 21-year-olds, frat boys, sorority girls. Our generation has changed in that regard too.

I wrote my son [Quentin, who is two and a half months old] the letter, “Letter to my Unborn Son,” on the Daily Beast, and I think about that [how to explain my porn career to my son] a lot. He’s going to have have a lot of questions. But I think with the generation he’s growing up in, the questions won’t be the same as they were in my mom’s generation. He’s going to be used to people that don’t really care about privacy, he’s gonna be used to people sexting and posting half-nude photos of themselves. So I think what I’ve done won’t be such a big deal.

I think the fact that you’re speaking at Harvard Law sort of indicates that we’re at least moving in that direction.

I enjoy that role. I don’t know if I see myself as a spokesperson, but it was a career I spent over a decade on, so I certainly have a lot of experience. I really enjoy helping people learn about it. I feel like I’m a middle-of-the-road voice. When I was active in the industry, I was very bothered by the fact that you always had extremists: People were either very pro-porn, everything about porn is good and there is no bad, or people were very against it. The whole thing was just awful. So I always wondered, why can’t people recognize the good and the bad, because there’s good and bad in everything? And I feel like I’m that person.