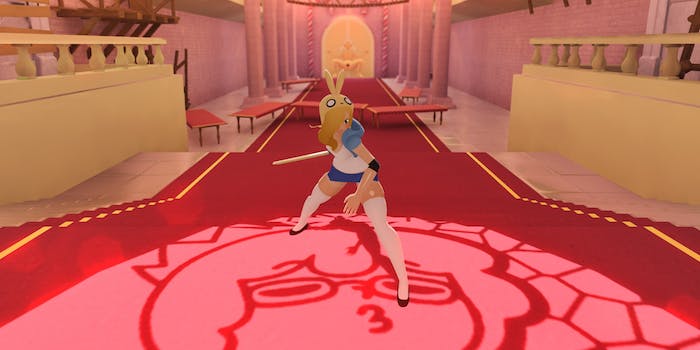 Come on, grab your friends.

So, like any adventurer, our hero battles her way through hordes of enemies to escape. When she finishes them off, she restores her energy by sticking out her bare ass and shaking her rump, inviting the souls of her enemies to fuck her. Pick the right position for sex, and they’ll orgasm, then rise up into the sky and disappear. Another soul freed! Then the process repeats over and over again until she escapes.

Does the photo above seem uncannily familiar? No, this isn’t an 18+ Adventure Time reboot, although you’d be forgiven for thinking so. That’s the main character from Hot Glue, an upcoming adult indie game that combines customizable lesbian avatars with online sexual interaction and an adventure setting inspired by Cartoon Network’s classic TV show.

At the moment, Hot Glue’s adventure mode is just a prototype level. But outside of the ARPG game, Hot Glue offers a social hub feature that’s a fascinating adult game in its own right. In it, you can create your own lesbian avatar and have sex with other players’ characters. Mid-sex, your anime girl can be caught doing the deed by the “paparazzi,” who will share their sly photos on an in-game board accessible to other players. It’s a cute idea that simultaneously encourages users to check out one another’s avatars and plays into exhibitionism kinksters’ fantasies.

As for future plans, the development team teases the final game will have “more parts to customize your character,” “more hub places to explore and hang around,” “tons of places and boss battles” in the adventure mode, and “several minigames,” according to the game’s description.

The Daily Dot has reached out to the Hot Glue development team for comment.